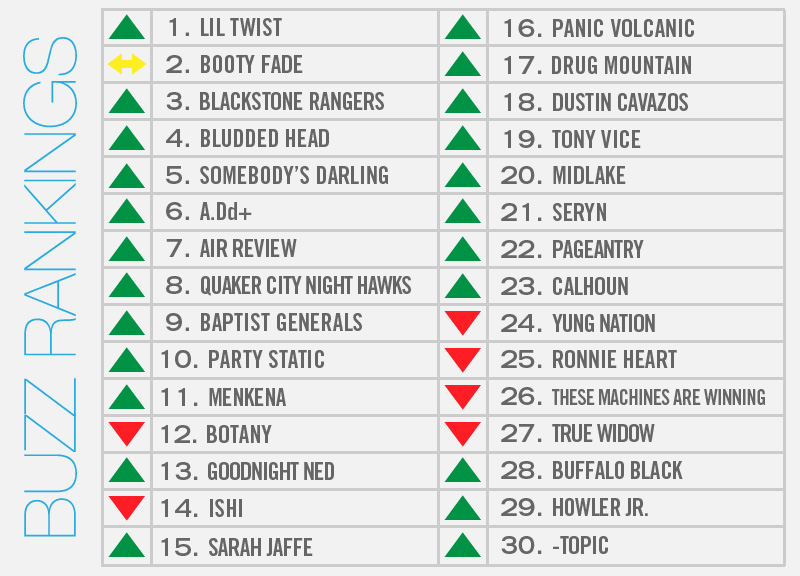 Lil Twist Twerks His Way To The Top.

Each week, we take a survey of the local music scene and try to determine which acts in town are really putting in work and seeing it pay off. Which bands have the most intriguing shows coming up? Which bands are getting the most press around town? Which bands have accomplished the most notable feats of late? Based off these criteria, our music writers submit a list to be weighted and compiled into a master list that's unveiled each week in this here space. We like to think it's fairly revealing. Check out our previous Buzz Rankings here.

There's no question that Oak Cliff-born rapper Lil Twist earned his top spot in the Buzz Rankings this week.

OK, so maybe he's not necessarily the reason his latest single has been literally everywhere the past few days. But being deft enough to leak a song featuring Justin Bieber and Miley Cyrus called “Twerk” in the same week in which Cyrus's much-talked-about VMAs performance singlehandedly made “twerking” the most overused term of the week? That's pretty impressive. And, much as we're sick of hearing the term behind Twist's song title, we certainly can't fault a guy from striking while the proverbial iron is blazing hot.

Also quite the talk of the town this week? The third annual Gorilla vs. Bear Fest, which took place at Granada Theater last Friday. Like in years past, GvBIII was equal parts surprising and impressive in its ability to bring together the local community in support of the always well-curated batch of under-the-radar talent. And fest openers Booty Fade, in our eyes at least, seemed to stir up as much buzz for this bill as any of the other acts that performed before headliner Danny Brown. Local treasure Ronnie Heart similarly earns some shine this week for keeping things going after GvBIII with a DJ set next door at Sundown.

Another hot topic in the local music community this was Bludded Head's Nevada Hill, whose recent cancer diagnosis was revealed in the Dallas Observer earlier this week. A number of benefit shows have already been set up to help out the without-health-insurance musician, including a trio of coming reunion performances from Hill's long-defunct noise band, Drug Mountain.

Other artists find themselves on the list thanks to big shows: Air Review, who headlined Dada last week, were added to the Index lineup yesterday; Somebody's Darling, Quaker City Night Hawks and Goodnight Ned will take over Granada Theater this weekend; Botany announced a super rare upcoming live appearance at Sundown; and -topic and Buffalo Black are set to open for Kool Keith at Dada tonight.

Elsewhere: Party Static will play a free album release show tonight at the Double Wide; Jimmy Menkena prepares to take a beating tonight at The Ticket's Fight Night; and Baptist Generals plays a free show at The Foundry later this weekend.