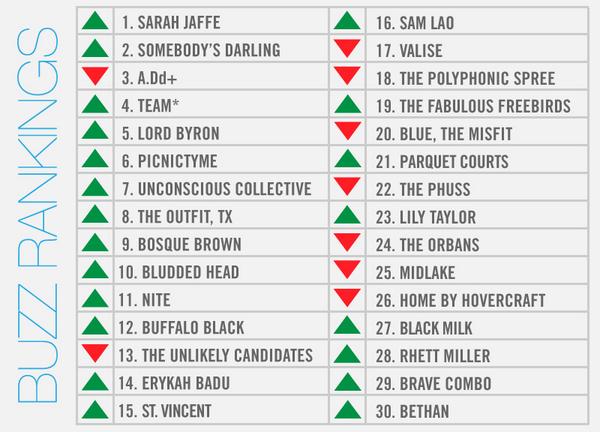 Even before we began the arduous number-crunching process that helps determine what local band or musician is going to top the Buzz Rankings each week, it was painfully obvious that Sarah Jaffe was going to come out on top for her unprecedented 10th time.

Was it any wonder at all? No, not really. Because, aside from releasing her third LP this week, Jaffe is also set to make her Majestic Theatre debut this Saturday. As such, she was either interviewed or profiled in every single publication in North Texas this week. (Speaking of: Keep an eye out for our coverage coming tomorrow! It's totally different, we swear!)

Also celebrating the release of its third LP with a show this Saturday will be local alt-country heroes Somebody's Darling, and — just like Jaffe's disc — SD's Adult Roommates has received high praise from the multiple outlets in town that have reviewed it thus far.

Making this an even crazier weekend is the fact that, just the night before, A.Dd+ will also hold a release show for its new EP as well.

Meanwhile, Unconscious Collective and Cozy Hawks earned press for their latest albums, as did Bethan and Bludded Heat for their upcoming efforts. Moving on, TEAM* will open tonight's Red Bull Sound Select show, and Blue, the Misfit, The Outfit, TX and Buffalo Black will do the same for next month's Isaiah Rashad-headlined affair. Then there's The Fabulous Freebirds, the iconic '80s wrestlers whose entrance theme is the subject of a new documentary.