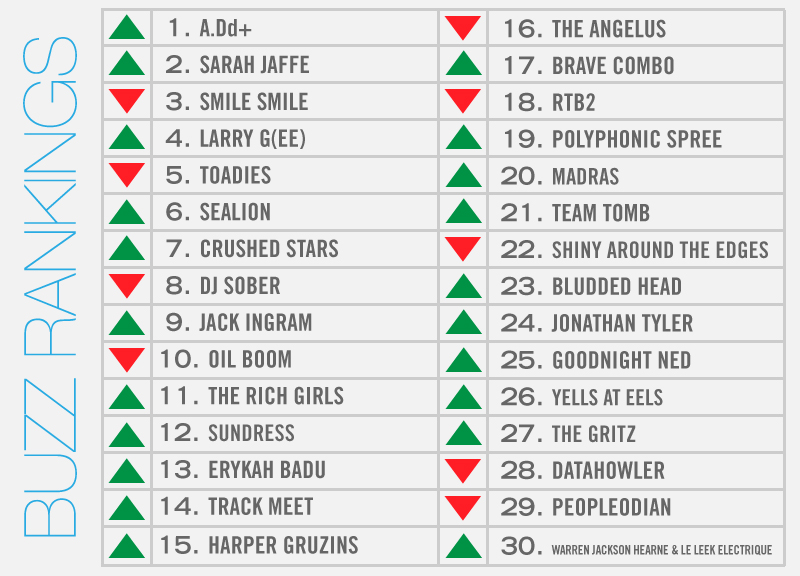 When you're a music blogger as popular as Gorilla vs Bear's Chris Cantalini, people stop referring to you as a blogger and begin simply calling you a “tastemaker.”

And when you decide to put on a festival people are going to talk about it.

As such, the perpetually-buzzing local hip-hop duo A.Dd+, who performed at the second annual Gorilla vs Bear Fest this past weekend, caught a lot of additional shine this week.

Not that they needed it. The pair, whose next show is on August 10 at Bryan Street Tavern, have also been working on a new mixtape they'll releasing in the coming weeks. In other words: They've been giving people plenty to talk about.

But thanks to the fest, they got more talk. So too did A.Dd+ collaborator DJ Sober, who, along with his rapping friends, lands in the Top 10 of this week's rankings as well.

Not far behind this week is Sarah Jaffe, who was announced this week as one of the inaugural performers of the Arts District's new 700-capacity City Performance Hall. Her next performance in town, however, will be at the much more intimate Dan's Silverleaf on Friday night.

Slipping to third after enjoying two straight weeks atop the rankings are Smile Smile, whose Marry a Stranger album release show is still a week away.

Tomorrow night at the Prophet Bar, the local soulster Larry g(EE) will perform. He recently got back in town after spending time touring as part of the Van's Warped Tour.

Also helping bump him into the top five? Maybe his addition to a certain recently announced yacht rock party being held at Dada next Sunday.

The same, we assume, is probably true for Sealion (who is also playing with The Coathangers at Bryan Street Tavern tomorrow night) and The Rich Girls, both of which also rank highly.

That's a much more pleasant way to make the rankings than, say, 11-year-old Harper Gruzins, whose rendition of the “Star-Spangled Banner” went viral after critics began calling it the “worst National Anthem rendition ever.”