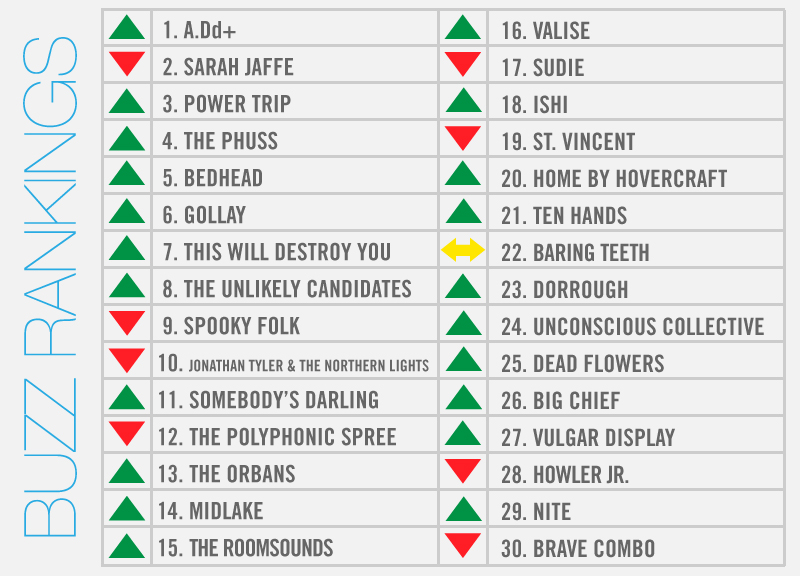 This Week, A.Dd+ Put Itself Back On The Map.

Since the '90s, Alec Baldwin has hosted Saturday Night Live a record 16 times. That's just one more than Steve Martin. In recent years, whenever one of these men hosts the show, the other will come along later in the season with a hosting gig of his own — y'know, so as not to let the other get too far ahead of him.

So it's only fitting that a week after all-time Buzz queen Sarah Jaffe topped our list for a field-besting ninth time, the Rankings' all-time No. 2 finishers, A.Dd+, would follow that up with its eighth No.1 positioning.

To put that in perspective: These two acts have held the top spot a full 13 percent of the time that we've been keeping track.

And, this week, the most beloved hip-hop act in town earned its most recent visit to the top of the list thanks to the release of its new NAWF EP, an effort the duo recently spoke with us about. The twosome will perform at release for the EP on Friday, August 22, at Trees.

For those keeping score at home, yes, that's just one day before Ms. Jaffe will celebrate the release of her own LP — the one that helped her top last week's Rankings — at the Majestic Theatre.

Looks like next week's Buzz Rankings should prove rather interesting, indeed.

Another big players in the rankings this week was Power Trip, which played a rather rowdy homecoming show at Sons of Hermann Hall. Same goes for Spooky Folk up in Denton. And, like those two acts, which play these parts far less often than they once did, Ten Hands played its second show of the year at the Kessler over the weekend as well.

Other big stories from the week included St. Vincent's turn as fill-in bandleader on this week's Late Night with Seth Meyers shows and the fact that The Phuss drummer Trey Alfaro was involved in a hit-and-run accident while riding his bike. (Something to keep in mind: A couple of benefit shows have since been organized in Alfaro's honor.)

Elsewhere: Bedhead will re-issue its entire catalog; Jonathan Tyler & the Northern Lights and The Roomsounds helped Trees celebrate its fifth anniversary; and Sudie, This Will Destroy You, Unconscious Collective, Gollay and Vincent Neil Emerson all released new music to various amounts of local acclaim.