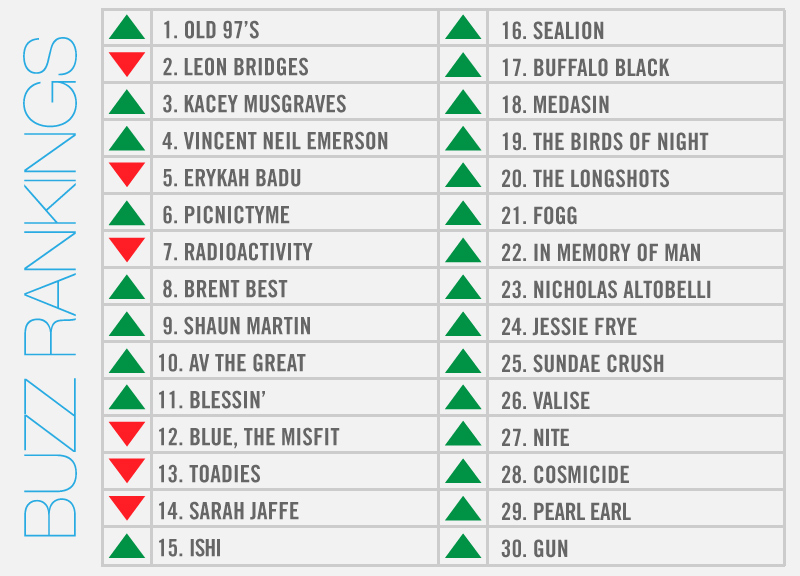 This Week, Old 97's Had All The Answers.

Over the weekend, Old 97's helped the Twilite Lounge celebrate its second anniversary by performing on the back patio of the intimate Deep Ellum bar. And apparently damn near every music writer in town was in that packed house because the instantly-legendary show was covered by most every publication in town.

And though Twilite co-owner Danny Balis called it the best Old 97's show he's seen in the last 15 years, it was only one of the week's highlights for the Dallas luminaries.

That's because also this week the band found itself an answer on Jeopardy. I'll take, “How fucking cool is that?” for $100, Alex.

In any case, it marks the seventh time the Old 97's have topped our weekly, local music power rankings since we've been keeping track of these things.

To get there, the band knocked down 10-time Buzz Rankings champ Leon Bridges. It's worth noting, though, that this marks the sixth week in a row that Mr. Bridges has finished No. 2 or higher, earning his spot this week thanks to his hitting No. 1 on Billboard's Top R&B/Hip-Hop chart.

Similarly, Kacey Musgraves topped Billboard's Top Country chart, and Shaun Martin topped iTunes' Jazz chart. They finished No.3 and No. 9 in this week's Buzz Rankings, respectively. Also earning a feature in Billboard this week was Dallas-based producer Medasin, whose Pink Polo EP has already racked up an impressive amount of plays online.

Then there was Fort Worth's Vincent Neil Emerson, whose debut LP premiered on our site this week and who earned himself a feature in Fort Worth Weekly as well.

Similarly, Picnictyme got the Gorilla vs Bear treatment and freshly released tunes and/or videos from Toadies, AV the Great, The Longshots, In Memory of Man, GUN, Nite and Cosmicide helped earn those artists their respective spots on the list, too.

Elsewhere: Erykah Badu was featured in Vogue; The Birds of Night and Valise were announced as part of this year's Untapped Dallas fest; and Ishi, Sealion and Blue, the Misfit will do the Red Bull Sound Select thing tomorrow night.