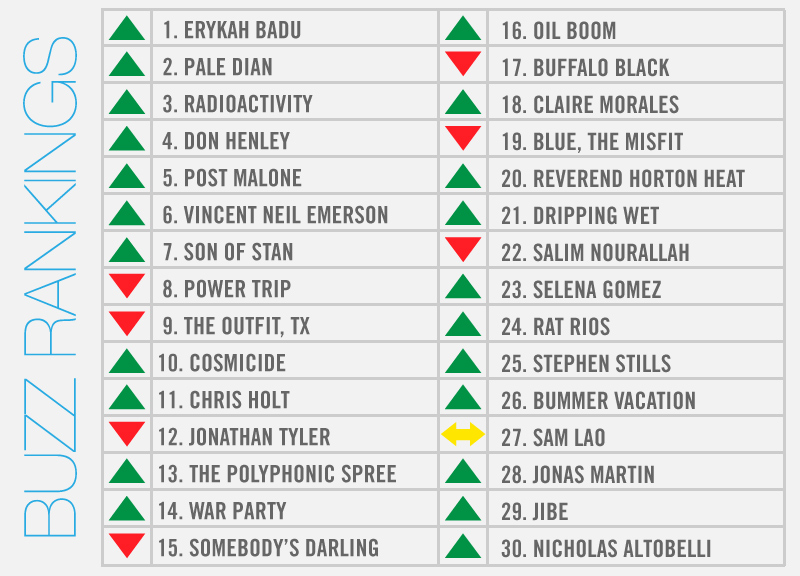 There's a lot of big-name national talent in our accounting of DFW's most buzzing acts in town this week, to be sure. But there's no denying that Ms. Erykah Badu completely deserved to walk away on top.

After calling out the Black Eyed Peas for completely ripping off her “Honey” music video on social media, every publication in the country was quick to jump on the story. And quite rightfully so: Her video did win a couple of VMAs. Plus, BEP mastermind Will.i.am is kind of known to be a habitual biter.

For those keeping track, this makes the ninth time Badu has topped our weekly, local music power rankings. That total puts her ahead of A.Dd+'s eight wins, while just behind Leon Bridges' 10 and Sarah Jaffe's unprecedented 12.

Just behind Badu this week, Pale DÄ«an makes its first entry into the rankings. Sort of, anyway. Formerly called Blackstone Rangers, the band will play its first show under the new name this weekend — its last before relocating to Austin.

In the No. 3 hole, Radioactivity premiered one of the coolest music videos we've seen all year via Noisey. Likewise, War Party and Post Malone each released new videos this week, too.

Speaking of which, we premiered a new clip for Son of Stan's “The Lady That's Around Me” earlier today as well. In celebration of that fact, as well as summer in general, that band's throwing a big pool party over at Shipping & Receiving, where acts like War Party, Blue the Misfit, Bummer Vacation and several others will perform.