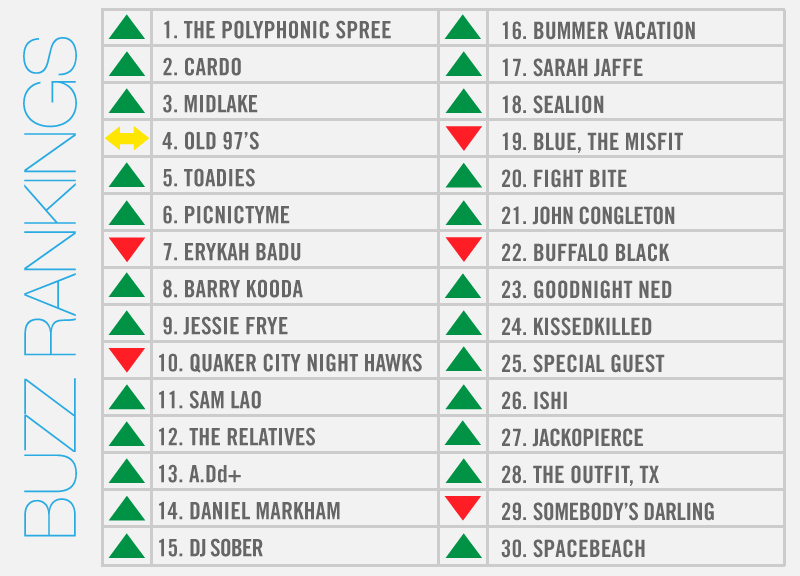 This Week, The Polyphonic Spree Tapped Into Its Potential.

Yes, it's true: The butt of everyone's favorite local music joke once again finds itself atop our weekly local music power rankings.

While The Polyphonic Spree can point largely to this weekend's much-anticipated Dada showing as being largely responsible for helping it land the No. 1 spot this week, it's far from the only source of buzz for the plus-sized outfit this week.

As of late, the band has been releasing tracks from its upcoming Hold Yourself Up remix album. Then, just this morning, the band was announced as part of the lineup to this year's Untapped: Dallas festival.

This week makes the sixth time the Spree has topped our Buzz Rankings, though it's last week atop the heap was well over a year ago.

Also appearing on that Dada bill with the Spree are fellow rankings-makers Sam Lao, who also appears on the just-released debut track from Picnictyme's upcoming LP, and the Quaker City Night Hawks, which was recently announced as part of an upcoming Bruce Springsteen tribute album. Quaker City is also just one of a handful of artists that made the list this week while also appearing on our list of the most anticipated local releases for the rest of 2014.

It's also been a pretty momentous couple of weeks for Midlake. The Denton heroes turned in a much-lauded performance at England's Glastonbury Festival, performed with Pearl Jam at Belgium's Rock Werchter festival and still found time to chronicle the belongings of its suitcases for Paste.

Then there's Fort Worth producer Cardo, who lucked his way onto the rankings. By that, we mean that the man behind Jeezy's just-released, Jay Z-featuring single recently told MTV that he only ever sent that beat to Jeezy by accident.

Elsewhere: Ishi will headline Trees this weekend; Spacebeach released a new album; and Jessie Frye released her “Shape of a Boy” video.