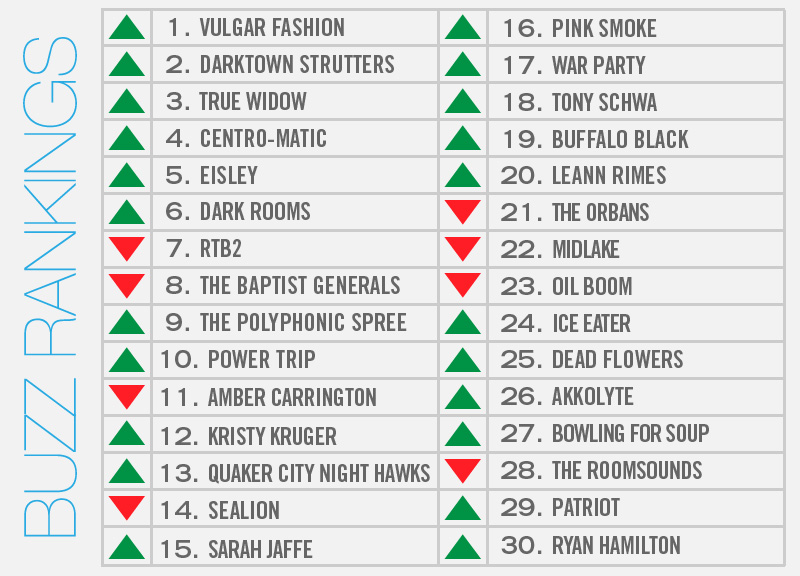 Almost Nothing Could Stop Vulgar Fashion This Week.

In a week where several of North Texas' bands were making national headlines, perhaps it's a little surprisingly that it the band that comes out on top of this week's rankings made their noise mostly on a local level.

Then again, none of those other acts saw a scheduled three-hour gig of theirs get cut short after just a five minutes because venue personnel didn't approve of their sound. Alas, that's what happened to Denton electro duo at The Dram this week. And, though the band was still paid for their efforts regardless, this debacle was the source of much conversation throughout the week.

The controversy garnered the group two feature stories on D Magazine's FrontRow blog alone this week. And that's on top of the fact that the duo will perform what's sure to be yet another audacious set tonight as part of this weekend's Oak Cliff Film Festival kickoff party. Fittingly, that Texas Theatre-hosted performance comes just after a screening of the documentary Pussy Riot: A Punk Prayer, which delves into the story of the subversive Russian feminist punk outfit that made international headlines after being jailed for “hooliganism” last year.

Here's the thing, though: When one considers the accomplishments of all the bigger bands Vulgar Fashion beat out this week, the fact that Vulgar Fashion was the talk of the town this week is only more remarkable.

For instance? There was Darktown Strutters, who earned a mention on the immensely popular, locally based tastemaking site Gorilla vs Bear this week. And there was Eisley, who perform at The Door tonight after their Kickstarter-related fiasco earned its own share of national talk chatter.

Elsewhere, huge performances from last weekend helped another pair of national artists rank highly this week. On Friday night, True Widow helped pack Trees while opening for Baroness ahead of the release of their Relapse Records debut. And, on Saturday, the Baptist Generals played their first album release show in Denton in a decade. Subsequently, the band then embarked on an East Coast tour in support of The Mountain Goats.

Several other bands hit the road this week, too. Among them: The Hanna Barbarians, who played an EP release show at Lola's before skipping town; Quaker City Night Hawks, who we caught up with earlier this week between Oklahoma gigs; Sealion and War Party, who are playing Lola's tonight before hitting the road tomorrow. In somewhat related news, the Polyphonic Spree also announced an upcoming world tour of their own.

Other acts earning national press this week includes Denton ex-pats Parquet Courts, who earned a spot on Spin Magazine's best songs of the year so far list and who were featured on NPR's World CafÃ©. Not to be outdone, Kristy Kruger saw NPR personality Ira Glass doing the Charleston at her Kessler gig over the weekend. Oh, and Richardson's Amber Carrington forgot her lyrics on this week's episode of The Voice, too.