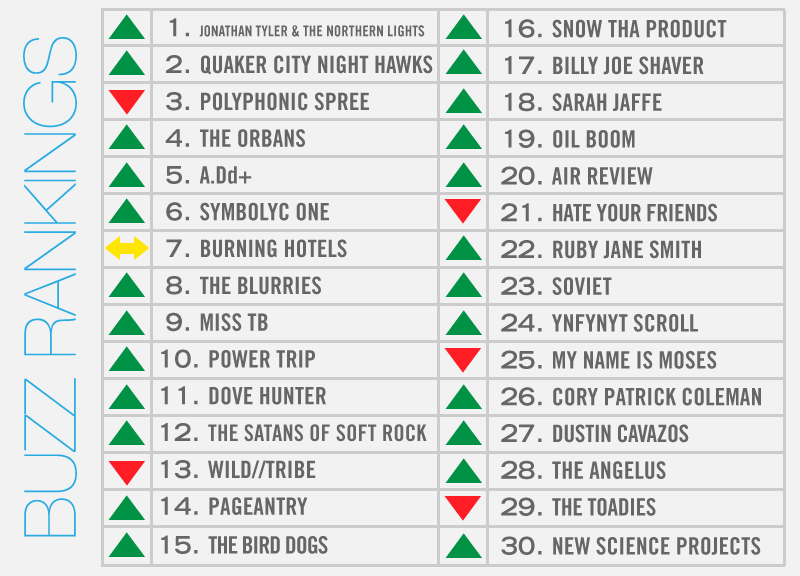 This Week It's Jonathan Tyler In The Limelight.

One of the biggest shows in town this weekend is the all-local bill over at the Granada Theater tomorrow night, featuring Jonathan Tyler & The Northern Lights and openers The Orbans and Quaker City Night Hawks. The fact that a bunch of locals can warrant playing in a room the size of the Granada's not only speaks to how well the local scene is doing right now, but of how successful blues rockers Jonathan Tyler & The Northern Lights have become the last few years thanks to their raucous live shows.

But they're not the only locals getting love. The Polyphonic Spree score highly once again this week by announcing that they're in the process of recording a Christmas album. This news, of course, coming just a week after a cover of Neil Young's “Heart of Gold” put them back in the national spotlight for the first time in a good while.

Hip-hop artists A.Dd+, Brain Gang Blue, Dustin Cavazos and -topic all received votes this week after being tapped to open this weekend's SchoolboyQ show at The Door. A.Dd+, who appear once again in the rankings after missing out for the first time ever last week, also performed at The iStandard Producers Showcase event earlier in the week. That event was judged, in part, by Grammy-winner Symbolyc One, who has been in the spotlight as of late thanks to interviews he's given recently in which he's been discussing Kanye West's upcoming solo record.

Other big local bills — like the free Dove Hunter and Blurries bill over at The Foundry, the Southern Lord Records Showcase at Dada that featured recent local signees Power Trip and Wild//Tribe, and the big red dirt showcase at South Side Music Hall benefiting The Senior Source and organized by KTCK 1310-AM morning show host/Bird Dog's member George Dunham — all helped these respective acts get a little extra local shine this week.

In the new releases department, New Science Projects released a split tape with the now-defunct Star Commander at a release show at J&J's earlier this week. That bill also featured Hate Your Friends, which features former members of Star Commander.

Fellow Dentonite Cory Patrick Coleman, who is a member of A.M. Ramblers and Hares on the Mountain, released his first solo record last weekend prior to the Hares' weekly Sunday happy hour gig at Dan's Silverleaf, commanding a little more local attention for himself as a solo performer.