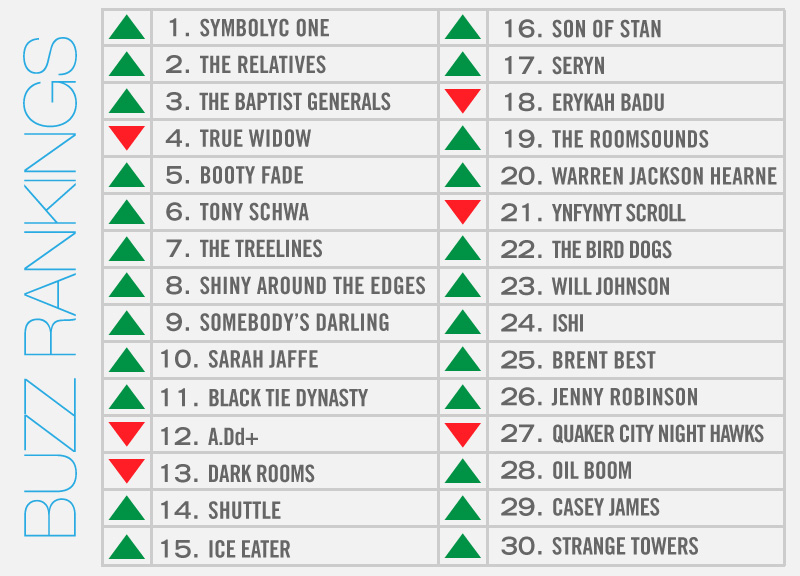 This Week Produced Another Victory For Symbolyc One.

Though he did quite well for himself in last week's edition of our weekly Buzz Rankings, SymbolycOne, perhaps, still isn't getting the credit he deserves locally for producing a pair of tracks that appear on Kanye West's Yeezus, which is currently the No. 1 album in the country.

Surely, creating a full 20 percent of the beats on an album that sold 327,000 copies in its debut week should count for something, no? As if that weren't enough to firmly cement S1 into this week's top spot, the producer also told Hip Hop Weekly this week that he's currently working on projects with Eminem and Snoop Dogg. He's also starting a new group with Lupe Fiasco.

Just a point behind S1 this week is West Dallas heroes The Relatives, who were featured in this week's special “People” edition of the Dallas Observer. Along with members of fellow locals acts The Treelines, Warren Jackson Hearne & Le Leek Electrique and Shiny Around the Edges, who were each featured in the issue in one capacity or another, the gospel group's rise to prominence helped make them one of the 30 most interesting entities in town this year, per the weekly. It's hard to argue otherwise: Their mainstage performance at Wilco's Solid Sound Fest caught the ear of at least one Rolling Stone writer, who called the band's set a “funky throwdown.”

Another player on the national scene this week is Sarah Jaffe, whose music both inspired and appears in the animated short The Blue Umbrella that debuted in theaters nationwide last Friday as the opening feature to Pixar's Monster's University.

Meanwhile, rankings dominators The Baptist Generals continued to score highly when the band's frontman Chris Flemmons checked in from the road (the band are currently on a national tour with The Mountain Goats) to weigh in on the future of the 35 Denton festival following the departure of its creative director, talent buyer, and biggest financial backer. Locally, at least, that was the big music story of the week.

Elsewhere, Seryn debuted a new track via Paste, Booty Fade and Savage & The Big Beat each released new material of their own, Gordon Keith debuted his new band at The Kessler, Tony Schwa's Cool Out reached past The Crown & Harp's capacity on Monday night, and local favorites of yore Black Tie Dynasty will reunite for a couple of shows this weekend.