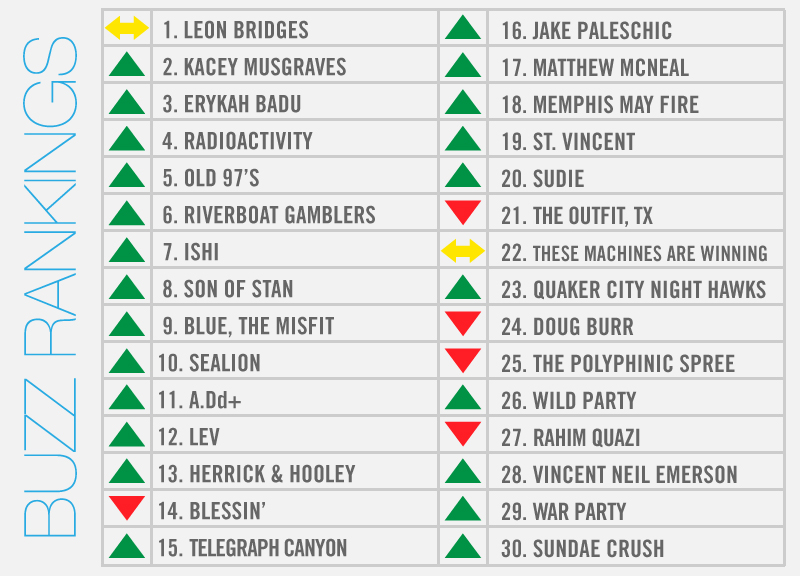 For the second week in a row — and the ninth time in the last eight months — Leon Bridges once again finds himself atop our weekly, local music power rankings. That much should surprise absolutely nobody at this point. For nearly as long as that run, Bridges' major label debut full-length has been talked up to be one of the most-anticipated local albums in recent memory.

And when that sucker finally dropped this Tuesday, it was met with as much fanfare as you'd expect. Locally, Bridges played Barefoot at the Belmont last week, plus a pair of release shows at Fort Worth's Scat Jazz Lounge over the weekend, in the lead-up to the release. Then, on the eve of his album's drop date, Bridges stunned with a performance on The Tonight Show that was noticeably more confident than his previous late-night television appearance.

Just behind Bridges in this week's rankings was North Texas ex-pat Kacey Musgraves, who dropped a major label release of her own, her second for Mercury Nashville. Thus far, that one too has garnered many a positive review. And, in a week's time, Radioactivity will release its own sophomore disc for Dirtnap. In the interim, the band made the LP stream-able via Noisey this week.

Also in Noisey late last week was Mel from The Outfit, who put the Dallas hip-hop scene on blast, making sure the rest of the world knows what's going on here.

Other acts earned their spots this week thanks to big shows: Old 97's, for instance, was announced as a headliner for Lone Star Beer's upcoming music festival; Riverboat Gamblers and Son of Stan will play this week's Red Bull Sound Select Show; and Ishi, Sealion and Blue, the Misfit were announced as next month's Red Bull performers. Blue, The Misfit also played last weekend's JMBLYA fest with A.Dd+, and Memphis May Fire will appear on this weekend's Vans Warped Tour lineup at Gexa.

Elsewhere: LEV premiered a new video; Matthew McNeal will release a new album this weekend; and These Machines Are Winning and Telegraph Canyon were among a ton of locals that released new tunes this week.