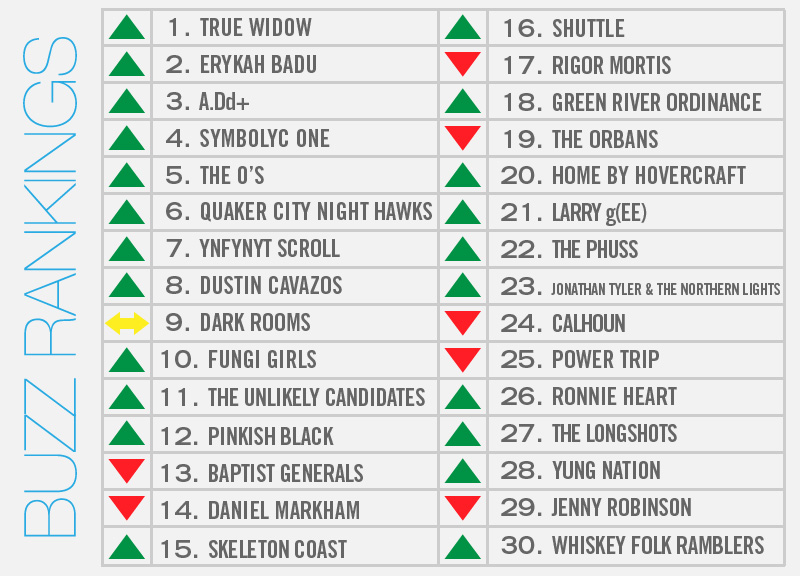 True Widow Got Verified This Week.

That's how National Public Radio's Lars Gotrich — blind to potentially painting himself and his organization as some sort of SNL caricature of themselves — oddly describes the Dallas-based stonegaze trio True Widow.

Hey, it's intended, at least, as complimentary. And, overall, it'ss an accurate call-out; unlike their counterparts at Vice, at least credit the NPR team with not mistaking the band as an Austin-based outfit.

But it is a rather surprising, unforeseen call-out — the nasally-voiced, thick-framed-glasses-wearing set cheering on this dark, heavy and trudging outfit' greatness — and, surely, that's what we and so many other area publications found so endearing about this added publicity for the band's upcoming, July 23 release, Circumambulation.

It's also why the band deservedly reached the top of our North Texas music scene Buzz Rankings this week.

True Widow was hardly the only local outfit to have a good week, though. Erykah Badu made some noise when she was announced as the headliner for the first of Red Bull's coming series of Sound Select concerts slated to take place on a monthly basis throughout town for the rest of the year.

Elsewhere, Dustin Cavazos published the video for hat's potentially his best track yet released, A.Dd+ released a new cut from the national release of their already locally approved DiveHiFlyLo disc and The O's were given their own radio show.

But, honestly, the local artist that perhaps had the biggest week of all didn't seem to get much shine this week. Dallas-based rap producer Symbolyc One didn't craft the beat for just one track on the new Kanye West album that no one can stop talking about; he had two such cuts. Seems we were the only ones around these parts to tell you this, unfortunately.

That's just kind of how these Buzz Rankings work, though. If they were crafted based solely on our own opinions, they'd often come out looking like a very different list.

Instead, somehow, even a Green River Ordinance can get some love.