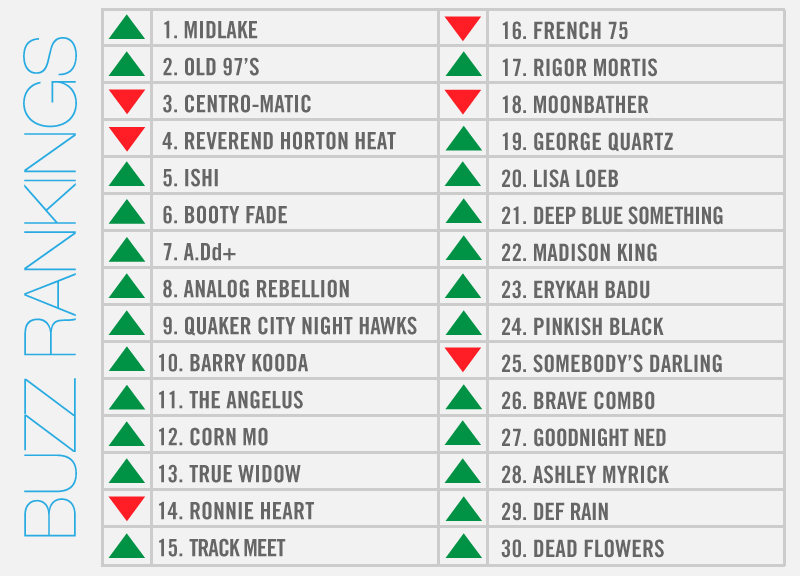 This Week, Midlake Ran This Town.

The clip, directed by My Name is Earl actor Jason Lee features the band jogging around its hometown in what could just as easily be an advertisement for the Paschall Bar the band owns or perhaps a tourism bureau promo or maybe even a PSA touting the health benefits of jogging.

Which kinda makes sense, actually, since Mojo points out that the video is intended as a sort of promo for an upcoming documentary on the band that was also directed by Lee.

Were all that attention not enough to earn the band its sixth overall time topping our weekly, local music power rankings (or seventh if you count the so-called “Grandlake” group's win back in March 2012), there's also the fact that the band recently announced that it'd be opening for Neil Young when that icon performs his first-ever concert in Turkey later this year.

Similarly, the Old 97's released a video of its own this week for its song “Let's Get Drunk & Get It On,” which made its premiere via the Wall Street Journal. That clip features the GoPro footage shot during the band's album release show at Strauss Square back in April. Likewise, Ishi — which performed a rather memorable set at last weekend's second annual Elm Street Music & Tattoo Festival — released an animated video of its own this week for the song “Emotional Hard Drive” that quickly made the rounds.

Then there was A.Dd+ and Booty Fade, both of which performed as part of a free show where concert promoters Spune announced some of the bands playing this year's Index Festival. Among that rather solid Local Natives-, Future Islands-, Foxygen-, and Kaiser Chiefs-topped bill was local outfit The Angelus and the aforementioned A.Dd+.

This week's other big local music story, of course, was Nervebreakers guitarist Barry Kooda's plans to make a mockery of Open Carry Texas' gun-toting ways by staging his own Guitar Open Rally.

Elsewhere: Corn Mo, Deep Blue Something, Lisa Loeb and Erykah Badu were all referenced on the new season of Orange is the New Black; Centro-matic performed a pair of local release shows for its latest album; and Analog Rebellion will represent the local contingent at tonight's Red Bull Sound Select show.