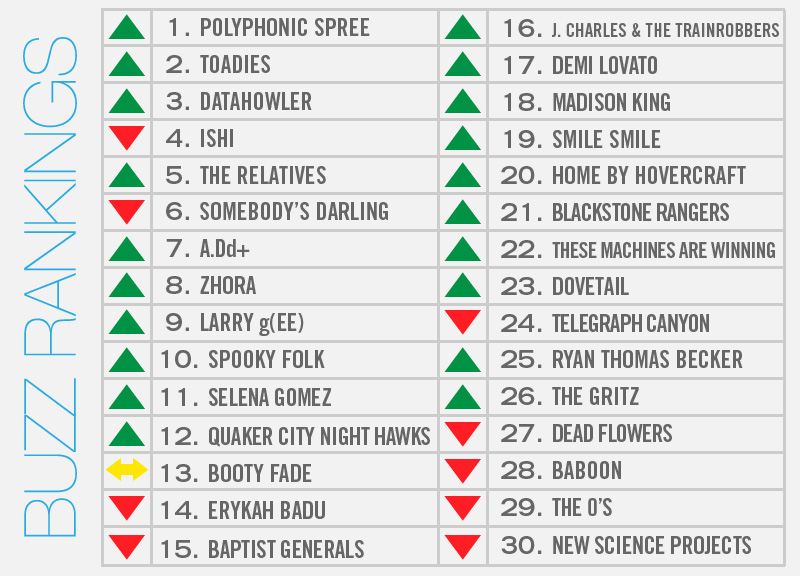 The Polyphonic Spree Know A Thing Or Two About Being No. 1.

Each week, we take a survey of the local music scene and try to determine which acts in town are really putting in work and seeing it pay off. Which bands have the most intriguing shows coming up? Which bands are getting the most press around town? Which bands have accomplished the most notable feats of late? Based off these criteria, three of our music writers submit a list to be weighted and compiled into a master list revealed each week in this here space. We like to think it's fairly revealing. You can check out our previous Buzz Rankings here.

Though it was originally scheduled to come out later this month, the much-anticipated next full-length from The Polyphonic Spree — the massively influential band's first since 2007, not counting last year's holiday LP — was recently pushed back some and rescheduled as an August release.

Still, May is shaping up to be the Spree's month regardless. Between appearing in the main support slot at this weekend's fourth annual Homegrown Music and Arts Festival, finding their current single “You Don't Know Me” prominently featured NPR's All Things Considered, and their announcement of a national tour that finds them playing the Bonnaroo and the Isle of Wight festivals, the Spree slid fairly easily into the No. 1 position on this week's Buzz Rankings chart.

The Homegrown Festival and all the chatter that goes with it similarly this week boosted the buzz on acts such as Datahowler, A.Dd+, J Charles and the Trainrobbers, The Relatives, Madison King, Zhora, Larry g(EE) and Somebody's Darling. Zhora also faced some last-minute shuffling in their lineup before their Homegrown appearance. Somebody's Darling, on the other hand, used a Good Morning Texas performance to promote theirs.

The Toadies come in the No. 2 hole this week, still riding a pretty strong wave from last week's batch of announcements, which included the full lineup to this year's Dia de los Toadies festival and a new comic book authored by drummer Mark Reznicek. Add to that a solo acoustic performance by frontman Vaden Todd Lewis on the Sundown's rooftop patio as part of the soiree celebrating the debut of the band's new “Rattler's Revival” music video.

Also scoring highly, once again, are last week's champs, Ishi, who took to the Granada Theater last Friday to celebrate the release of their sophomore album. The band will follow that performance up this weekend with an opening slot for Com Truise at Lola's out in Fort Worth on Friday, plus a headlining gig at Three Links' unofficial Homegrown Fest after-party.

X Factor judge and Colleyville product Lovato, for instance, rolled out a unique new method of earning buzz for her latest album via Twitter this week. Fans could preview her new disc a week before its release by hashtagging the titles to each of its tracks. In the end, every single song of hers was a worldwide trending topic on the social media site.

Not to be outdone, Grand Prairie's Selena Gomez this week premiered her new Hindu-inspired video for the song “Come & Get It” off her own upcoming album.