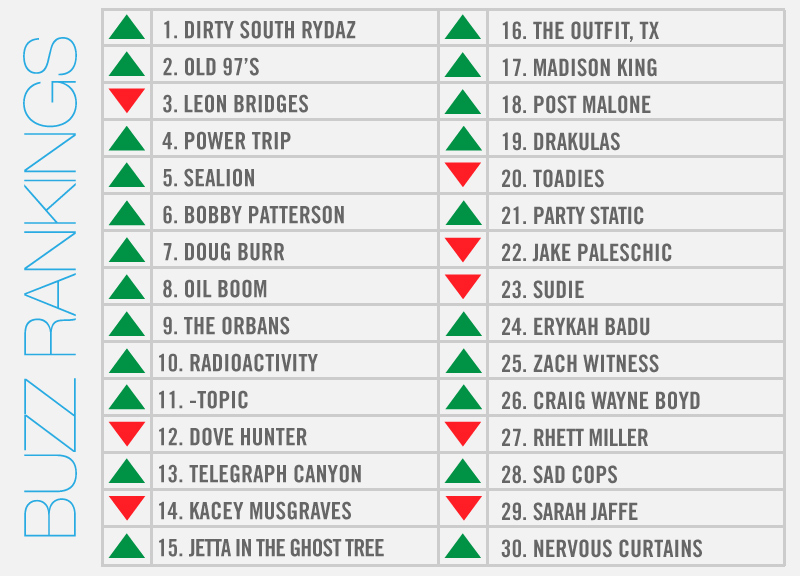 DSR Is Riding High This Week.

Between Untapped, Homegrown and a handful of other big ticket events set to go down, it's looking like it's gonna be a busy weekend here North Texas.

And not to be overlooked in all this craziness is the Dirty South Rydaz reunion show at Trees tomorrow night.

The comeback show comes on the heels of a handful of newly-released tracks and a brand new music video that we premiered earlier this week. Once the biggest thing in Dallas hip-hop, this weekend's show should be pretty packed — enough, anyway, to earn DSR its second-ever trip to the top of our weekly local music power rankings.

And, naturally, those other big weekend events were big players in the rest of this week's rankings, too. Playing main support at Saturday's Homegrown Festival, for instance, helped earn the Old 97's the No. 2 spot. And other Homegrown acts — Sealion, Bobby Patterson, Oil Boom and The Orbans — each did rather well, too.

Meanwhile, after holding down the top spot in each of the past two weeks, Leon Bridges dropped down to No. 3, although his addition the Austin City Limits lineup and opening turn at this weekend's Lord Huron show at South Side Ballroom are not to be discounted in the slightest. Bridges, it seems, just keeps on buzzing.