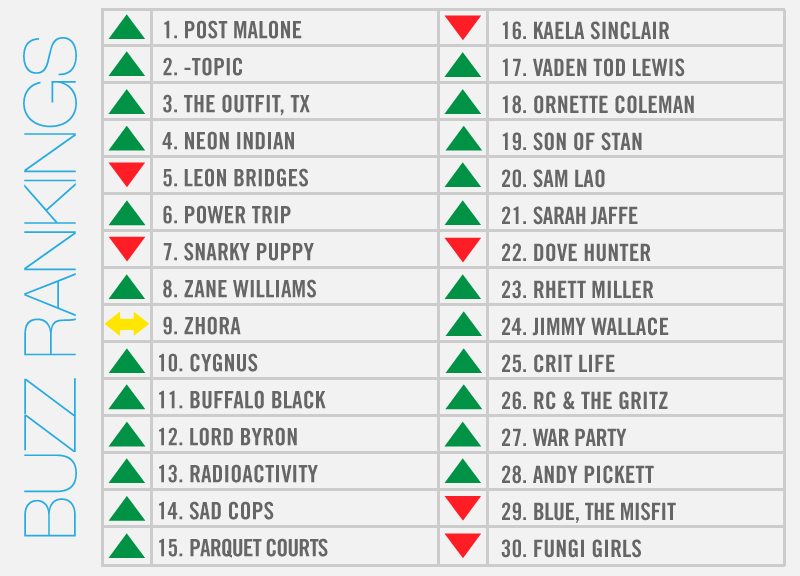 If you're noticing more hip-hop artists represented in this week's accounting of the most buzzing acts in town, that's perhaps by design.

As Pete explained this time last week, we're currently midway through a branding effort called #DallasWeek, in which hip-hop promoters all over town have come together to help spread some shine onto one another's events instead of competing with each other.

Thus far, those efforts have been pretty successful, too. Just look at the top three spots on this week's list for evidence of as much. Taking home his first-ever No. 1 is Post Malone, thanks to the fact that the young man — who has been blowing up the Internet all spring with viral hits like the ever-catchy “White Iverson” — comes home this week to play headline his first official Dallas show this weekend at Trees.

Just behind Post Malone in the rankings is -topic who, along with Joonbug, threw a dessert-filled, two-day birthday celebration that also doubled as something of a celebration of the Dallas hip-hop scene as a whole. All kinds of performers from that one — Sam Lao, Blue, the Misfit, Devy Stones, G U N Music, Alsace Carcione, ThatKidCam, Larry g(EE), Kirk Thurmond, Mixed Magyk, Koolquise, Bummer Vacation — each received votes this week as well. As did DJ Sober, who celebrates his birthday tonight as part of his annual bash over at Beauty Bar.

Then there was The Outfit TX, which premiered a new music video via Noisey and will appear at both tonight's Bishop Nehru-headlined Red Bull Sound Select show at Dada and a pop-up event this weekend at Centre. Oh yeah, and just earlier today the guys were announced along with Parquet Courts, Power Trip and Neon Indian as performers at this year's Fun Fun Fun Fest.

Elsewhere: Neon Indian also came roaring back with its first new single in years; Zhora opened that much-hyped “secret” show at The Bomb Factory; and Snarky Puppy's new long-player debuted at No. 1 on iTunes' Jazz chart.