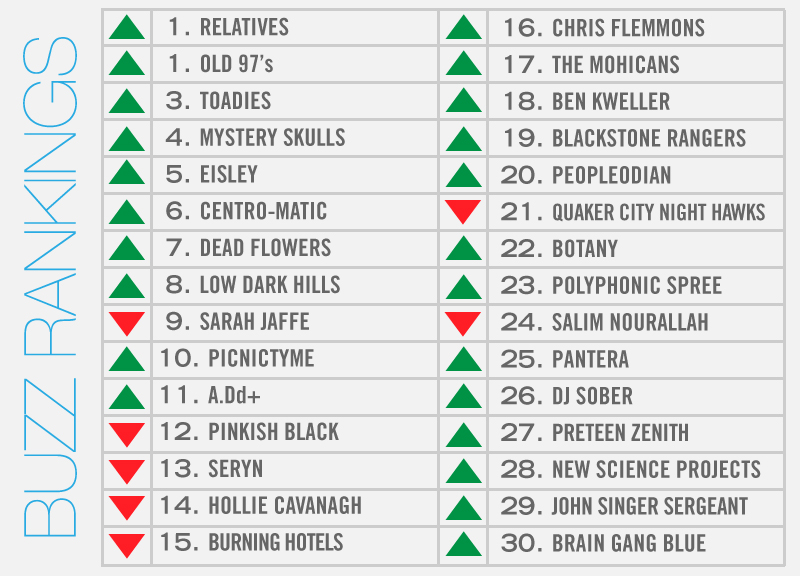 ACL Puts The Old 97's and The Relatives Into Our First-Ever First-Place Tie.

Is there any doubt we're right in the thick of festival season? Even a cursory glance at this week's rankings would reveal the list is littered with festival participants.

Topping the list — in our first-ever tie — are funk-gospel band The Relatives and alt-rock staples Old 97's, who represent the only two North Texas acts playing this year's Austin City Limits festival.

The festival, now in its 11th year, is considered one of the country's last big festivals of the summer season. The Relatives and Old 97's are set to join the likes of Jack White, Red Hot Chili Peppers and Gotye on the bill among others.

Local festivals play big on the list this week, too. The Toadies revealed the initial lineup of their 5th Dia De Los Toadies festival this week; it's set to take place on August 31 and September 1, with Helmet, Brutal Juice, The King Bucks and Soldier Thread among the bands on the lineup. The Toadies' announcement was pretty buzzworthy on its own, being accompanied by a wonderfully weird, NSFW music video for brand-new song “Summer of the Strange.”

Meanwhile, Mystery Skulls, Eisley, Centro-matic, Low Dark Hills, The Mohicans and Ben Kweller are all set to take part in this weekend's third annual Homegrown Fest in Main Street Garden Park. The Burning Hotels, it should be noted, are set to headline the official post-Homegrown Fest after-party at La Grange.

In other local festival news, the lineup for the second Gorilla vs. Bear Fest was announced this past weekend. Among the cutting-edge buzz bands selected by the popular taste-making blog to perform at its July 28 show at the Granada are local hip-hop duo A.Dd+ as well DJ Sober. Speaking of A.Dd+: The pair recently collaborated with producer Picnictyme on the the producer's “Horizons” track for his Sirens series. The collection of songs in the series is intended by the producer to be a precursor to his first solo LP, called Monsters, which is set to be released later this summer.

While technically not a festival, Pinkish Black and Baptist Generals frontman Chris Flemmons performed at Rubber Gloves in Denton to mark the club's 15th anniversary last weekend. And, on the flipside, Seryn performed in Fort Worth as part of the soft opening for Fort Worth's newest live music venue, the Live Oak Music Hall & Lounge. That club's first official show is the John Oates solo performance scheduled for June 15.