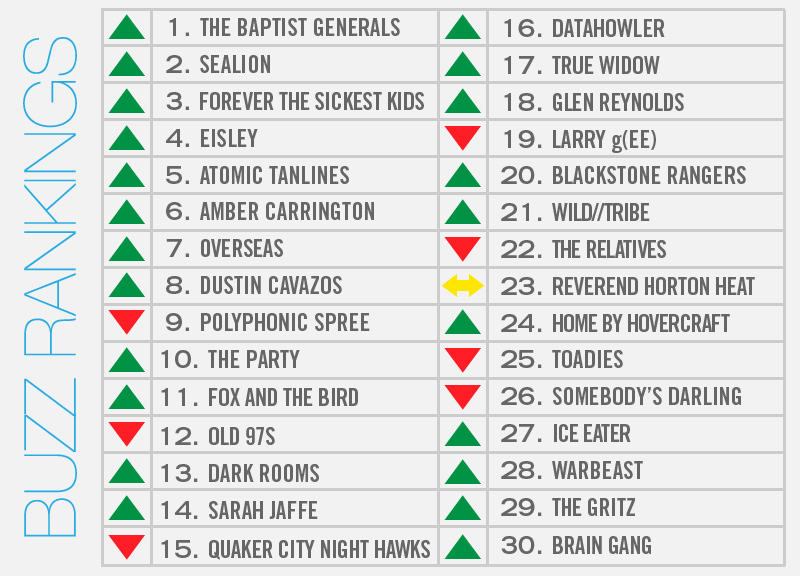 This Week, Baptist Generals Are The Toast Of The Town.

For long-dormant Denton outfit the Baptist Generals, the number 10 has had a lot of significance as of late.

Just this past Tuesday, for instance, the band released their stellar sophomore effort, Jackleg Devotional to the Heart, a full 10 years after their debut album for Sub Pop records.

Sure, a decade may be a long time to wait in between records, but as frontman Chris Flemmons told us earlier this week, there were plenty of reasons the disc took so long to produce.

Anyhow, in the Generals' case, the final result was well worth the wait. Have we mentioned yet that's it's a fairly immaculate album? Because it is.

Additionally, the band made promotional pushes this week that included releasing a music video for the single, “Dog That Bit You,” and performing an in-store at Good Records.

Other albums of note earning their release this week (and subsequently helping the artists behind them rank highly this week) include: Sealion and Datahowler, who are holding a dual release party tomorrow night at Three Links; Daniel Hart's new Dark Rooms project, whose full-length was released on Tuesday; and Fox and the Bird, who released a single off their upcoming full-length this week as well.

Also following in the The Baptist Generals' footsteps is another long-defunct act came out of hibernation: The once immensely popular DJ collective known as The Party reunited for a gig in New York last weekend. Meanwhile, Tony Schwa's long-running Cool Out Mondays weekly wasn't necessarily defunct, per se, but the DJ did announce that he would soon be bringing it back to the upstairs of The Crown and Harp where it got its start so many years ago. That venue, of course, was called The Cavern back then.

A handful of other locals and semi-locals made national news this week as well. First up was Forever the Sickest Kids. Sure, the band isn't the highest ranked this week, but their lead singer is currently being sued for millions, so there's that. And, as in the past several weeks, North Texas' own Amber Carrington continues to rank highly after continuing to stay alive once again this week on The Voice. Eisley, on the other hand, were condemned pretty heavily by an AV Club article regarding their “abusive” use of Kickstarter to raise funds for touring. And, just as the author of that piece predicted, even after failing to meet their goal the band announced plans for an upcoming tour shortly thereafter.

Elsewhere, the Atomic Tanlines helped organize a two-day DIY festival in a Denton taqueria; Polyphonic Spree, Old 97's, and Sarah Jaffe are among the artists performing at the free three-day Center Stage Music Festival in Arlington this weekend; and Wild//Tribe gets ready to play their final show this Saturday at Three Links.