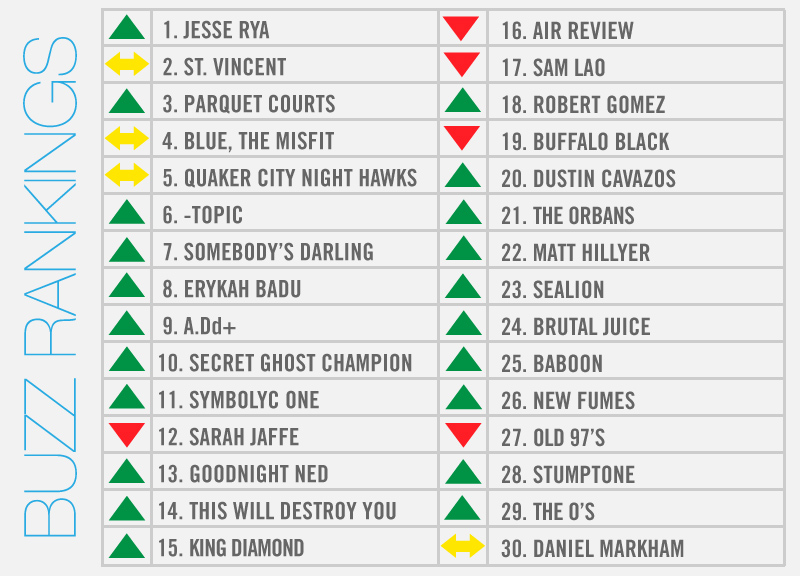 Though North Texas musician Jesse Rya was a completely unknown entity this time last week, he now finds himself alone at the top of our weekly rankings of the buzzing-est acts in town.

But with the whirlwind week that the guy's had, we sincerely doubt that this is even close to the coolest thing that happened to him the last several days.

Not by a long shot.

It was pretty awesome to begin with when one of his recent busking sessions outside a local grocery store caught the ear of a passerby to the extent that he felt compelled to film it. And, from there, things only kept getting more awesome for Rya: More passersby were so taken with Rya's jamming they began improvising along with him. If that weren't cool enough, the video racked up several million plays online. Then, a few days later, Rya found himself performing on Jimmy Kimmel Live! show alongside the likes of Juicy J, Trey Songz and Aloe Blacc.

We'd say that's about as successful a busking session as there is.

We also doubt that this is the last time Rya will find his way into this list, especially considering some of the acts he beat out to land the top spot.

Parquet Courts was the subject of a much talked-about and rather lengthy feature this week on Grantland. Meanwhile, the band's fellow Dallas transplant in New York, St. Vincent, confused a whole hell of a lot of folks with her super awesome Saturday Night Live performances last weekend.

It was also quite a weekend for Symbolyc One and Sarah Jaffe, who won a Billboard Music Award for Top Rap Album thanks to their work on last year's Eminem LP. Jaffe also announced that her next LP will be released on August 19.

Moving on, several other acts earned their spots on the list thanks to their inclusion on big music festivals — and much like last week's rankings, actually. To that end, A.Dd+, Sam Lao, The Orbans and Dustin Cavazos will appear at this weekend's Panther Island Pavilion-set Radfest. It was also announced earlier this week that Blue, the Misfit and his fellow kinda-locals King Diamond and This Will Destroy You will perform at this fall's Fun Fun Fun Fest. Likewise, Neon Indian, Brave Combo, -topic, A.Dd+, and Blue, the Misfit were among some of the bigger names playing this fall's Oaktopia Fest, which was also announced this week.

Of course, we'd be remiss if we didn't also mention that Quaker City Night Hawks, Somebody's Darling and Goodnight Ned are playing this month's Red Bull Sound Select show, which goes down tonight at Three Links.