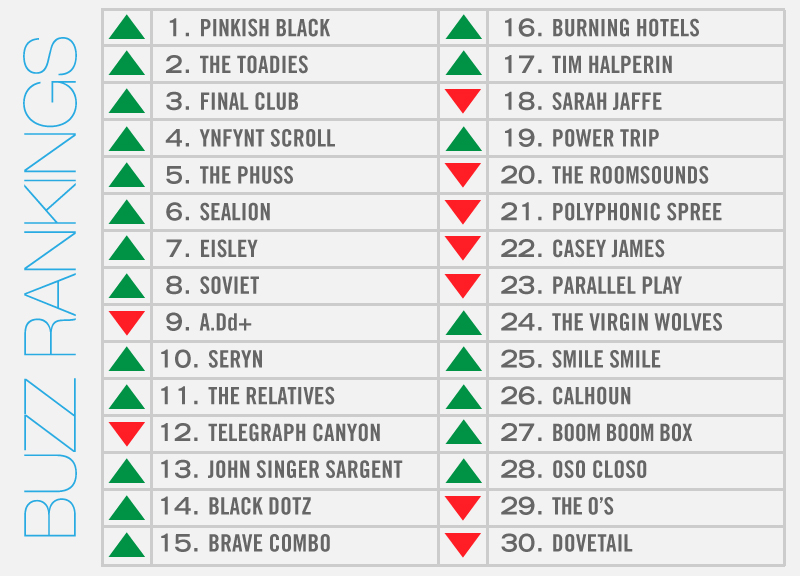 Pinkish Black Rises From The Darkness.

When Pitchforks namechecks your band, people notice — especially savvy Dallas media types, who almost uniformly wrote posts of their own this week to pass along the word that Fort Worth duo Pinkish Black had indeed been mentioned on the taste-making website.

So perhaps its of no surprise, then, to find out that Pinkish Black was the most buzzed-about band in town this week.

As our rankings continue, however, things do get a little more interesting. The Toadies, still riding high off the announcement of their new album, pop up in the No. 2 hole this week thanks to a Texas tour they're undergoing, Credit that band, too, for Sealion and The Phuss, their two local openers on this jaunt, for doing so well in this week's rankings, too.

Final Club does well this week, too, largely due to the fact that the band unveiled some new songs this week in their performance for Denton's always-excellent Violitionist Sessions.

Eisley pops up thanks to a strong showing at the Granada this week. Same with Soviet, who opened last night's White Denim show.

Ynfynyt Scroll continues to perform well, likely due to his steady stream of new, downloadable singles, each of which seems to draw solid local media attention.

As the list continues, more familiar faces appear — bands such as The Burning Hotels and Telegraph Canyon, who, despite never placing atop this list, consistently find themselves on it, which indicates a deeper, if less splashy, strength in their arsenal.