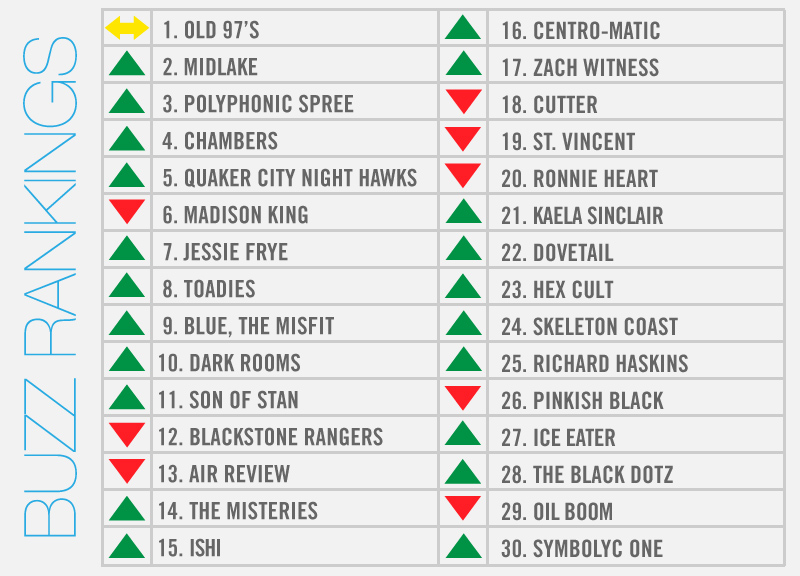 And why not? What a hell of a week it's been for the act that just celebrated the local release of its upcoming tenth studio effort at a nearly-sold-out show at Strauss Square. During that show, you might recall, the band also announced its plans to launch a Dia de los Toadies-esque outdoor festival of its own next year called the All the Way Weekend.

But it's not just us locals who've been gushing over the outfit's stellar new disc of late; this week, Rolling Stone also gave Most Messed Up a four-star review.

That magazine also named Toadies' Rubberneck one of the best mainstream alternative records of 1994 this week. And, ahead of its headlining turn at next month's fifth annual Homegrown Music & Arts Festival, the band also turned in a four-song session for the Daytrotter website.

Other locals earning national buzz were St. Vincent, who was announced as the musical guest for an upcoming, Andy Samberg-hosted episode of Saturday Night Live. And Symoblyc One was praised via Madonna's Instagram account for the pair's recent work together in the studio.

Then there was Madison King, whose band performed three sets in a 24-hour period this past weekend — twice while opening for the Old 97's in New Braunfels and Dallas, respectively, and a third time as part of Good Records' 7th annual Record Store Day bash. Other performers at that affair included Midlake, Oil Boom, Ice Eater, Son of Stan, Nervous Curtains, Kaela Sinclair, Dovetail, Air Review, Buffalo Black, Foxtrot Uniform and Pinkish Black.

And Pinkish Black, we might add, will also perform at Texas Theatre this weekend as part of a national tour with Italian prog-rock legends Goblin.