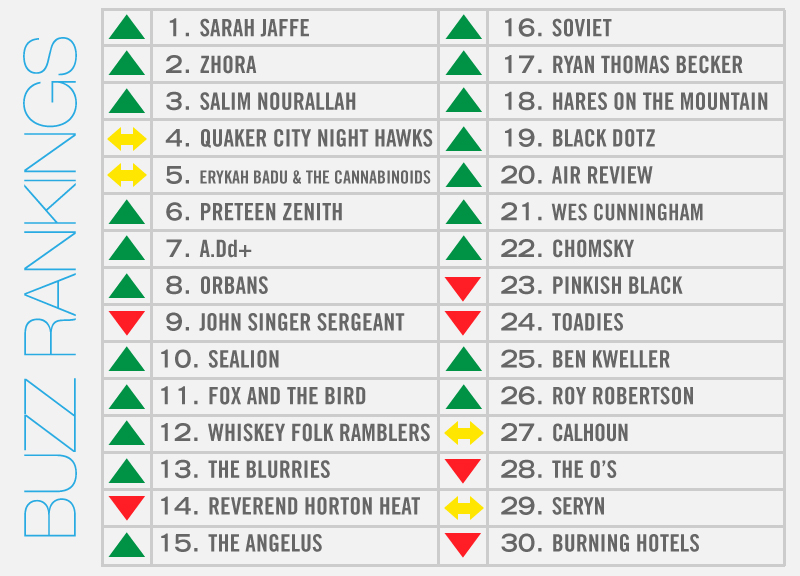 The Body Wins, And So Does Sarah Jaffe.

Just one week after John Singer Sergeant topped the rankings with perhaps the lowest cumulative total score since we've been keeping track, Sarah Jaffe tops the list as one of just a couple unanimous top selections.

That's no big surprise, really. Having NPR feature your upcoming sophomore full length album, a big Dallas Observer feature story and a lengthy write-up in the Star-Telegram will lead to all sorts of attention.

That album, The Body Wins, has received heaps of praise for the bold stylistic leap it's taken from Jaffe's previous releases, thanks to the help of local studio ace John Congleton.

The fact that Zhora, who performed at the Double Wide earlier this week, comes in at No. 2 and John Singer Sergeant, who comes in at the No. 9 spot, will both share a bill with Jaffe as she headlines The Granada on May 5 makes that show appear to be even huger than we initially thought. Also worth pointing out is that this makes the second week in a row in which a new Kirtland Records release has helped an artist earn the top spot.

Salim Nourallah's new album, Hit Parade, and Preteen Zenith releasing an early copy of their upcoming record Rubble Guts & BB Eye this weekend helped them each score high as well. Not far behind is the aforementioned John Singer Sergeant who is still riding some buzz of his recently released album as well.

Quaker City Night Hawks, who play in a prominent slot at the big Good Records party this weekend, are one of the highest ranking of the bands playing various Record Store Day shows around town. (See also: Whiskey Folk Ramblers, Ryan Thomas Becker, Sealion and Zhora.)

A.Dd+, who have appeared in the top half of these rankings every single week, released a new single called “When Paris Smokes” earlier this week and hinted at a 4/20 version of their popular WADD podcast to be released this week.

One-time local Ben Kweller headlines a big show at The Granada this week, which also helped his openers, Fort Worth's The Orbans, catch some of that buzz as well. Fox and the Bird, Reverend Horton Heat, Black Dotz and Hares on the Mountain also had notable local gigs this week. The latter, you might note, makes two entries for Ryan Thomas Becker on the list.

Lastly, Chomsky can thank local alt-rock station KDGE 102.1-FM The Edge for including them on the lineup for their annual EdgeFest concert this weekend in Frisco, and for the added spins of “15 Minutes to Rock” for yet another surprising appearance in the rankings for this mostly forgotten of late local favorite.