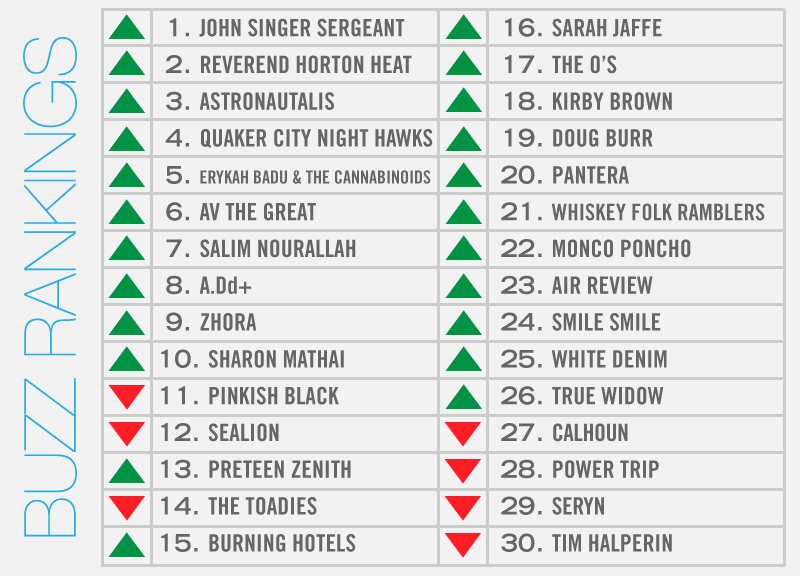 John Dufilho Gets High With A Little Help From His Friends.

A quick glance at this week's rankings gives one the impression it could have been written 12 years ago, with many circa-2000 local favorites find themselves scoring rather high. Take a look around: The Reverend Horton Heat have five local shows this week to promote the release of their upcoming DVD, Erykah Badu performs at Rio Room this weekend, Salim Nourallah released a new record with the Treefort 5, The Toadies are still buzzing after a string of local shows and a tour with Social Distortion and Pantera released a video for an unreleased Vulgar Display of Power-era b-side.

Back then, the man that tops our list this week, John Singer Sergeant (a.k.a. John Dufilho), and his alt-pop outfit The Deathray Davies were first starting to gain popularity. But the new record Dufilho released earlier this week under the JSS name is different than any other project he's ever worked on. The album's tracks, all of which were written and performed by Dufilho, were each sung by different artists, many of whom gained some buzz off the release as well. Salim Nourallah, Sarah Jaffe each got some additional shine off the release, as did Sir Earl Toon and Rhett Miller, who didn't rank this week, but still received votes.

It was also announced earlier this week that Grammy-winning indie-folk singer Justin Vernon of Bon Iver had recorded an album with sometimes-local rapper Astronautalis, who promises fans the project involves much more than simply him rhyming over folk beats with Vernon singing choruses.

Several other bands appear on the list due to their involvement with local Record Store Day lineups, including Quaker City Night Hawks, Sealion at Good Records' party, Whiskey Folk Ramblers at Doc's in Fort Worth and Doug Burr at Recycled Books in Denton.

Also happening this week: AV the Great drums up some awareness for Denton's growing hip-hop scene, Sharon Mathai causes a stir on NBC's The Voice, The Monco Poncho released a ridiculous (kids?) video featuring a song about spaghetti that is sung by puppets, and A.Dd+ and DJ Sober returned home after their recent tour. Plus, Pinkish Black is still riding some momentum after Pitchfork showed them some love last week.