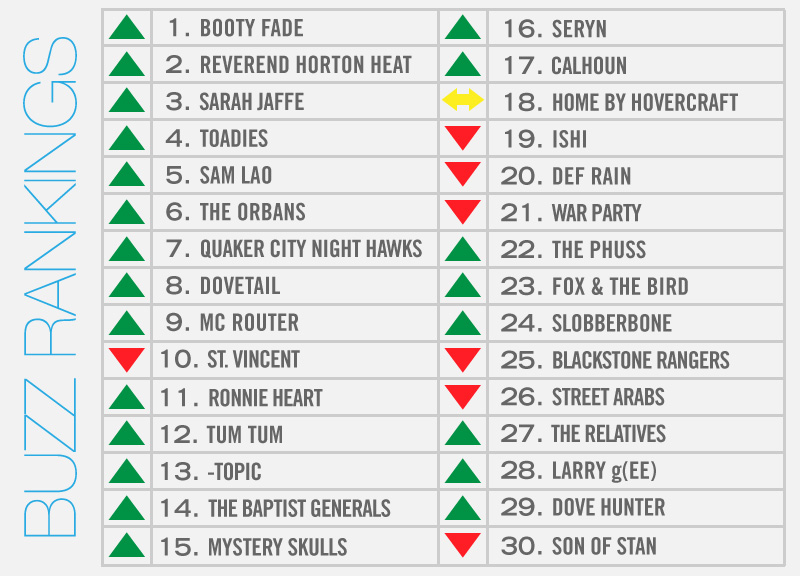 This Week, Booty Fade Popped Off.

Much as we'd love to take some of the credit, we're almost 100 percent positive that Booty Fade's second ever time atop our weekly local music power rankings has less to do with the fact that they're performing at our bi-monthly Pop That! party at The Travis tomorrow night, and almost everything to do with the fact that the aforementioned performance will commemorate the release of the duo's debut EP.

When they do celebrated that new release, it'll cap off a year-long buzz train that's been building since DJ Sober and Picnictyme made their live debut a year ago — like, almost exactly a year ago. To wit, the pair's only other time atop the Rankings came one year from tomorrow.

Anyway, all we're saying is that we can't really imagine Booty Fade failing to deliver tomorrow night following the prolonged buzz they've been building over this time period.

Of course, some other killer area acts also had fine weeks worth applauding.

Much like this week's Buzz champs, the ice cream punks in Street Arabs will also be hosting an album release of their own this weekend for theiir killer new disc, Bruised Fruit. As we've previously said of that effort, the Mark Ryan- and Jeff Burke-produced disc features much of the same lo-fi ethos and driving rhythms of their own Radioactivity and Mind Spiders projects, but with elements of soul and doo-wop sprinkled in for good measure.

As for everybody else? The tandem of big shows this weekend and recent announcements of big shows down the road helped a whole slew of bands make this week's list — acts like Sarah Jaffe and Son of Stan, who sold out Shipping & Receiving last Saturday, and were both announced this week as part of the lineup for this year's Homegrown Fest. The Phuss, meanwhile, will not only be a part of that bill, but this weekend's Three Links anniversary party as well. Likewise, The Baptist Generals will be playing both Homegrown and this weekend's Mad Worlds Records anniversary party.

Then there's acts like Quaker City Night Hawks, which will perform at both this weekend's Untapped Festival and this summer's just-announced Elm Street Music and Tattoo Festival. Joining them on the latter bill, of course, will be Reverend Horton Heat — once again a co-sponsor of the event — as well as Slobberbone and Brutal Juice.

Elsewhere, fellow Homegrown act Seryn was featured in NPR's annual SXSW preview, MC Router popped up on Dr. Phil, and the Toadies announced the dates for their annual Dia de Los Toadies bash (September 12 and 13) and the fact that they will debut their new Rubberneck documentary this Monday at the Kessler.