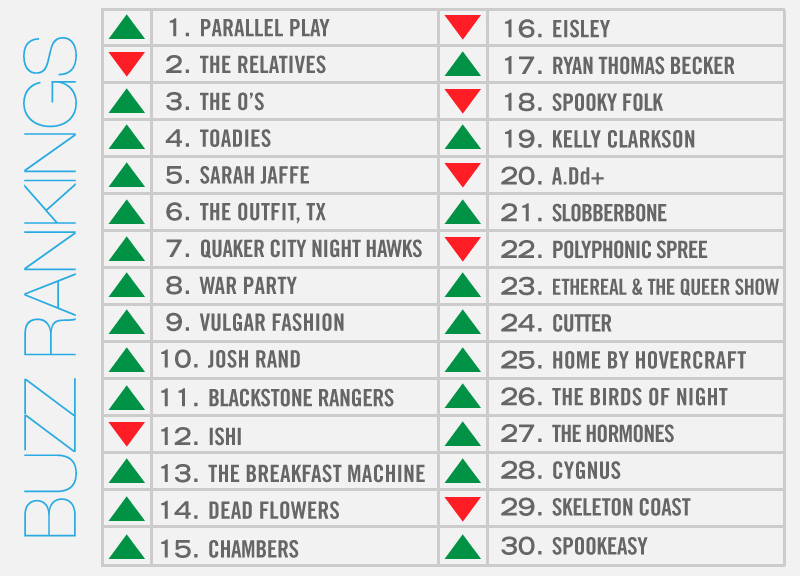 Each week, we take a survey of the local music scene and try to determine which acts in town are really putting in work and seeing it pay off. Which bands have the most intriguing shows coming up? Which bands are getting the most press around town? Which bands have accomplished the most notable feats of late? Based off these criteria, three of our music writers submit a list to be weighted and compiled into a master list revealed each week in this here space. We like to think it's fairly revealing. Check out our Buzz Rankings archives here

When the Big Folkin' Festival returns to the Prophet Bar this Saturday for the second straight year, it will be largely thanks to Parallel Play's Jeremy Drake, who once again helped organize this year's fest.

And if it's anything like last year's incarnation, you can expect a fairly enormous crowd to check out the lineup's roughly 30 bands performing in the complex's four stages.

Though his own band, who will be performing on the main stage at this year's fest, are known mostly for their propensity to churn out banjo-heavy covers of '90s alt-rock hits, putting on a show of this magnitude is no small feat. And, thanks to Drake's efforts, other area bands — such as Quaker City Night Hawks, RTB2, Dead Flowers, The Roomsounds, Goodnight Ned, Kirby Brown and The O's — can all credit the festival, at least in part, for their places in this week's rankings.

Meanwhile, last week's reigning buzz kings, The Relatives, lived up to the hype with their album release show at The Kessler. And, when you've got 40 years of expectations to live up to, that's no easy task. Still riding high from last week's win, The Relatives merely drop down a single spot in this week's rankings.

Music videos also proved themselves to be a big player this week. While the Toadies were busy filming a '40s tent revival-themed treatment for their “Rattlers Revival” single, Party Police were recruiting semi-nude coeds to go wild with at their “Spring Break” shoot. While the final versions of those releases won't surface for a bit, a pair of other artists did see their videos go live this week.

In a clip featuring almost as many costume changes as backup dancers, Ishi released their Winston's Supperclub-shot “Disco Queen” video earlier this week. Meanwhile, Dallas Observer's Best Rock Act of 2012, The Breakfast Machine, proved they could hold their breaths for a really long time in their underwater-filmed video for their new song “Getz.” Up-and-coming 17-year-old rapper Josh Rand too scored points this week for a new, A.Dd+-supported video.

Elsewhere, Kelly Clarkson and Chambers both released new singles, Eisley announced an upcoming album, Ryan Thomas Becker and Spooky Folk's Petra Kelly prepped for a Sparklehorse cover set, and The Outfit, TX reminded us how strong the Dallas hip-hop truly is, even if, sometimes, it's in Houston.