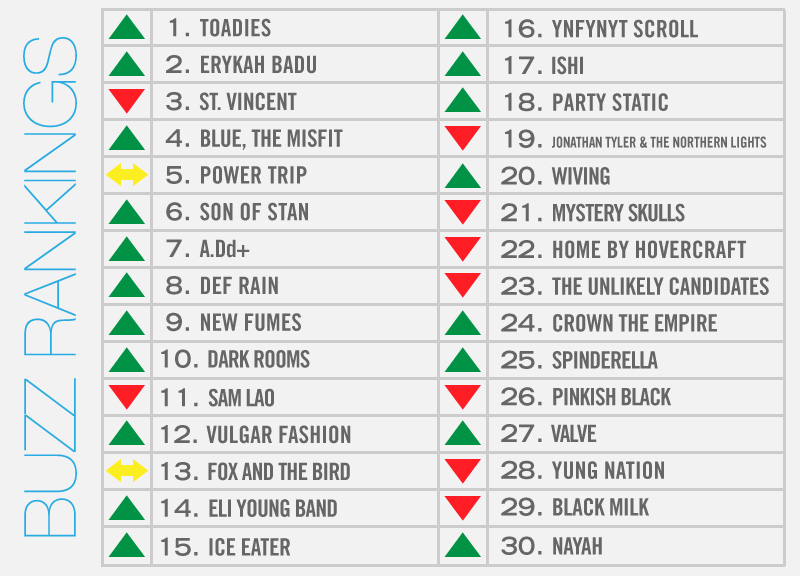 So Help Me, Toadies Did It Again This Week.

At this point, we're running out of ways to say it: Toadies are everywhere right now.

To recap: They completely rocked and melted faces at South By, they debuted their own beer, they unveiled a new documentary, and they announced this year's Dia de los Toadies festival.

All of this, of course, is before they headline this summer's Homegrown Fest, before Rubberneck gets the reissue treatment and before drummer Mark Reznicek's Buzzkill comic gets released next month.

Still, in spite of all that madness, this week marks only the third time the Toadies have wound up topping our weekly local music power rankings — and only the second time they've done so in 2014.

Moving on, SXSW helped a lot of other bands make this week's list. Erykah Badu, in particular, left quite the lasting impression after rocking the Fader Fort during the fest — a performance that was later fawned over in Rolling Stone. Other big locally-tied SXSW performances included A.Dd+'s opening turn ahead of Danny Brown's Red Bull-sponsored set and this hilarious set from Power Trip, in which a PBS correspondent was sacrificed for comedic effect.

Meanwhile, St. Vincent, who has topped the Rankings a handful of times herself in recent weeks, turned in sets in Austin and Dallas. She'll also be appearing on tonight's episode of Portlandia, too, for good measure.

Elsewhere: Blue, the Misfit collaborated with Kendrick Lamar; Son of Stan was the only local to play Spillover Fest; Sam Lao, Party Police and Home by Hovercraft performed at the annual St. Patty's Day parade; New Fumes landed yet another Flaming Lips collaboration; and Eli Young Band scored a guest spot on Conan.