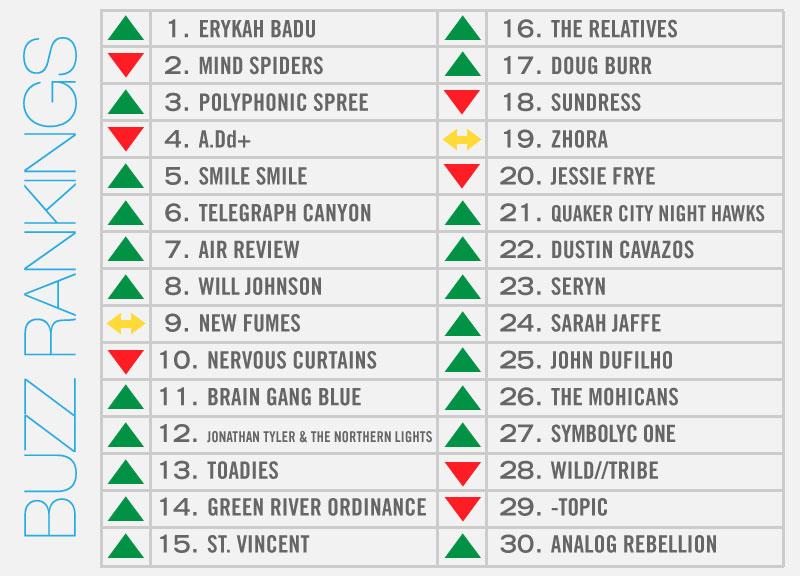 The Queen Takes The Throne.

The leader atop this week's Buzz Rankings list? No surprise: Erykah Badu, who, after watching her Malaysia concert get canceled, topped international headlines as well as local ones.

Surprisingly, though, last week's chart-toppers, Mind Spiders, gave the Queen of White Rock a solid run for her money, still riding high off of their recent well-received sophomore release.

Close behind them: The Polyphonic Spree, who announced a Dan's Silverleaf show this week and whose frontman made his acoustic solo debut at the Kessler Theatre; and A.Dd+, who bid Dallas adieu for their first-ever national tour after tearing the roof off of Dada last Friday night.

Next up is a batch of bands announced to perform at the inaugural KXT Summer Cut — Smile Smile, Telegraph Canyon and Air Review (plus St. Vincent a little lower down) — and New Fumes, who will appear on an upcoming Flaming Lips release for Record Store Day. Nervous Curtains follows, still riding high off of their recent release, with the Toadies (who just announced a new Dallas performance date) close behind. Jonathan Tyler & The Northern Lights and The Relatives fall in line shortly after, as both bands are slated to perform at this weekend's Margaret Hunt Hill Bridge opening, with JT and the gang also scheduled to perform at the Observer's St. Patrick's Day event in a few weeks. Beyond that, this week's rankings are filled out with bands doing well for themselves on smaller scales, be it with electric performances in their belt (see: Dustin Cavazos) or new ones just announced (see: Wild//Tribe, who will perform tonight at Trees).