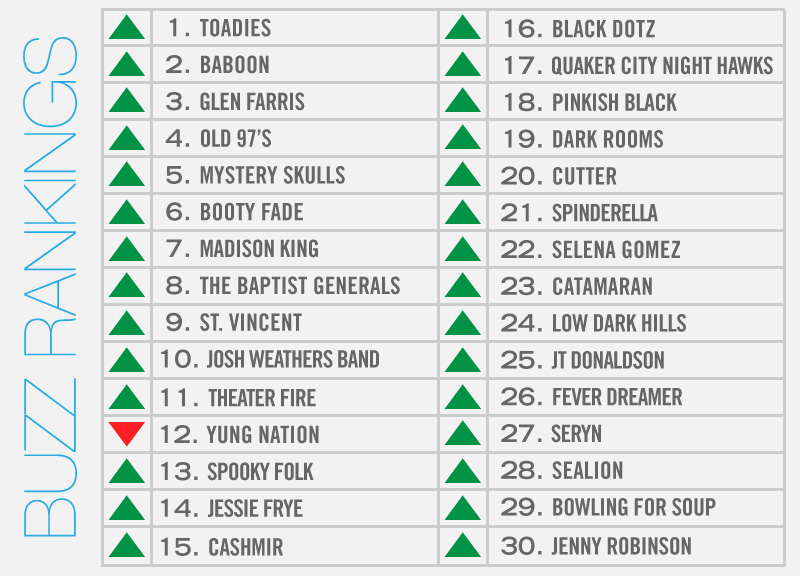 This Week, The Toadies Made Up Their Mind.

For better or worse, nostalgia is a big player in the Dallas music scene.

That's not to say that all of the heritage acts that have been performing of late are completely worthless, no. But, at the same time, it can't be ignored: The prospects of catching a bunch of 40-somethings still performing some of the same songs they popularized — and we use that term loosely here — back when its fans were in high school will always be a big draw in this town.

And, in looking at the upper tier of this week's local music Buzz Rankings, you'll notice that it's been a big week for bands whose heyday was undeniably sometime in the '90s.

At least in the case of the Toadies, who find themselves in this week's top spot, there's good reason for so much backwards-gazing: The band's current Rubberneck 20th anniversary tour finds the band performing its breakthrough release from front to back across the country. Earlier this week, the band announced that it'd be adding an inevitable Dallas stop to that tour this summer — and at the fifth annual Homegrown Music & Arts Festival, no less.

And, hey, the 23-year-old Baboon's recent return to live performances isn't entirely intended as nostalgia thing either. In that band's case, its members let it slip at a gig over the weekend that they've been working on some new material.

That's a move the 21-year-old Old 97's can surely relate to: That band released the first single from its upcoming tenth full-length this week — a song that, perhaps fittingly here, contains the line, “We've been doing this for longer than you've been alive.”

On the other hand, a few fresher faces were able to make some headlines of their own this week.

While Glen Farris may not exactly be the freshest thing in the local music scene, he is looking to become the newest member of Denton's city council. That much he made clear when he officially announced his candidacy earlier this week.