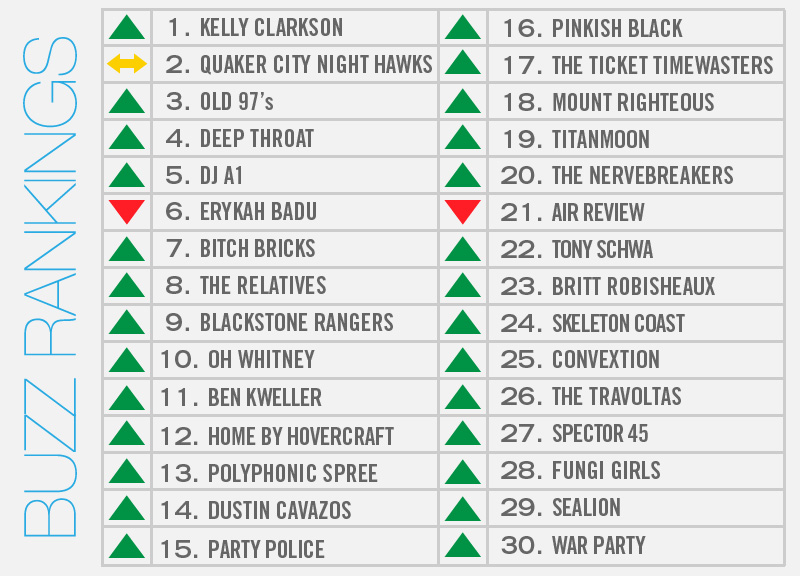 Kelly Clarkson Fights Her Way To The Top.

Though my personal votes only make up one third of the Buzz Rankings contingent, I don't mind saying that I am of the opinion that Kelly Clarkson, last week's fourth place finisher, got severely wronged in last week's rankings.

That week, she was on the cover of People magazine for chrissakes. I mean, what did last week's winner, Erykah Badu, really do other than announce that she'd be having a birthday party this year? C'mon, doesn't everybody have one of those every year?

Oh, Badu appeared on Wait, Wait… Don't Tell Me, too? Whatever.

Fortunately, Clarkson isn't the sort to just roll over in the face of adversity. Y'know, what doesn't kill her makes her stronger, and all that. After this week, that's an aspect of the singer's personality that nobody in America will ever question again. Earlier this week, when industry mogul Clive Davis released some sections of his Soundtrack of My Life memoir, a few passages didn't particularly sit well with Ms. Clarkson. After reading his account of their professional relationship, Clarkson wrote that she “refused to be bullied” and went on to write a lengthy rebuttal to Davis' accusations.

Speaking of live performances: Quaker City Night Hawks received tons of press this week after their CD release show at Magnolia Motor Lounge this past weekend. We were rather smitten with it ourselves, and only further satisfied later when we heard the disc, which finds the Fort Worth outfit finally offering up a studio album that approaches their celebrated live shows.

Credit a similar brand of live intensity for helping alt-country outfit Old 97's hang around for so long, too. Now in their 20th year, the band will headline tonight's bill at Granada Theater.

Perhaps the most eventful show of this weekend, though, takes place this Sunday at The Where House, where 14 of the bands that call Fort Worth labels Dreamy Soundz Records and Lo-Life Recordings home will perform on multiple stages. As we mentioned in this week's edition of White Noise, the shindig celebrates the release of a compilation cassette released as a joint effort between the labels, and it will feature bands like War Party, Fungi Girls, Sealion, Bitch Bricks and Siberian Traps, among others. We've heard no word yet, though, on whether this show will also feature the type of surprise guest appearance that their sister venue Live Oak Music Hall hosted last weekend, when Steely Dan co-mastermind Donald Fagen sat in on keyboards during last Saturday's set from Oh Whitney.

Elsewhere, Home by Hovercraft's rock opera On the Eve earned itself a second run, Titanmoon screened their first doc at the Angelika, The Ticket Timewasters made their first performance of the year at Ticketstock and The Relatives were announced as part of Wilco's Solid Sound Festival.