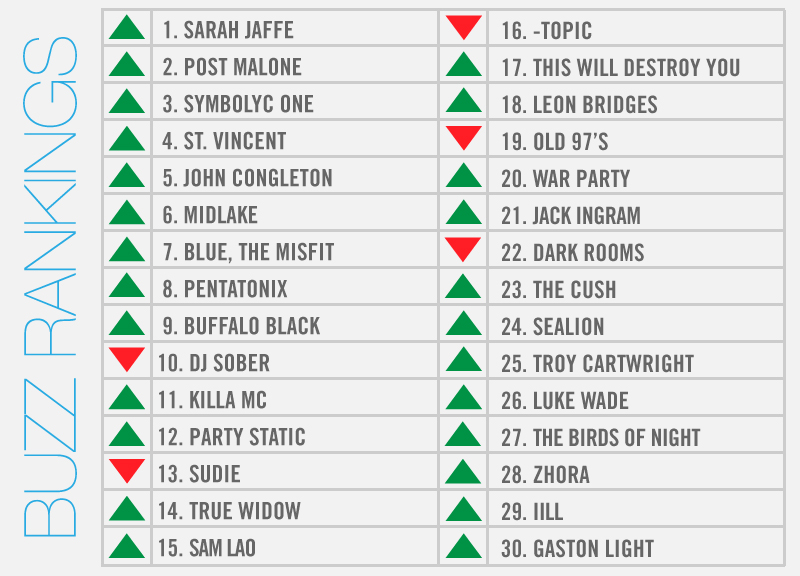 This Week, Sarah Jaffe Had Visions of Greatness.

Naturally, as music goes, the big news of the week was Sunday night's Grammy Awards — and, no, not just because of Beck, Kanye West and the stunning Annie Lennox performance. Though none of the awards won by the acts with local ties were televised, the North Texas region as a whole kinda cleaned up at the annual award show.

St. Vincent and Pentatonix's nods were the biggest of those, but not to be discounted were the tangential nods earned by John Congleton (for his production work on St. Vincent), Symbolyc One (for his work on The Marshall Mathers LP 2) and Sarah Jaffe (for singing the hook on MMLP2's “Bad Guy,” which she and S1 co-wrote). As a result, each of these acts placed highly in our weekly buzz vote tallies.

More surprising was the attention earned by the Southlake-bred rap upstart Post Malone, whose “White Iverson” single has amassed almost a quarter of a million listens on Soundcloud since he uploaded it there a little over a week ago. Dude became something of an overnight smash thanks to some serious blog support, including some love from the squad over at DC9 at night, which slobbered pretty hard over it — and not necessarily unjustly so.

Even more surprising, though, was the news that Sarah Jaffe would be dropping a new EP called Visions at her Trees show with Blue, the Misfit and Sam Lao on Friday night. That show already looked pretty interesting thanks to the fact that promoters have announced that all three acts on the bill were slated for a 9 p.m. set time — what? — and now it looks even more so thanks to the further addition of Jaffe's Dividends pal Symbolyc One on the bill. It'll be the first time the Dividends ever perform together in a live setting.

So, for those reasons, Jaffe came away with the No. 1 ranking this week for a record-setting 12th time. It's just her first in 2015, though!

Other acts making moves this week: Midlake, whose Jason Lee-directed documentary is about set to make its Texas debut; Buffalo Black, who's throwing a party to celebrate his song's placement in the new Spike Lee joint; DJ Sober, who dropped a new baby-making mix; Killa MC, whose eye-grabbing new video stunts on everyone's top rapper lists; Party Static, which celebrates a new EP this weekend; Leon Bridges, who's finally heading out on tour; and Gaston Light, whose “Wake Up and Fight” is the “best song in the history of recorded music,” according to at least one person.