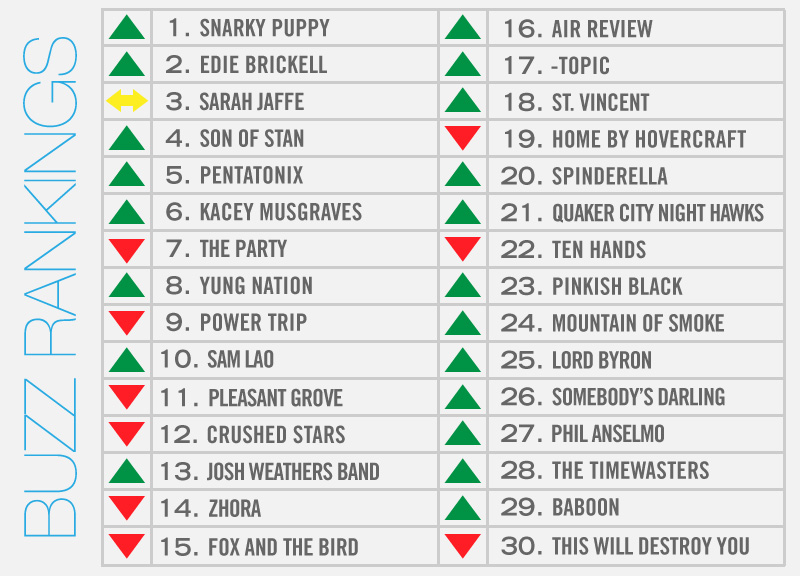 Snarky Puppy Earned Itself A Treat This Week.

With seven nods, Kendrick Lamar was one of the most heavily nominated artists heading into last weekend's 56th annual Grammy Awards. Thing is, there were several North Texas artists that left the ceremony with more trophies than Lamar.

OK, so maybe the fact that Lamar was shut out of all seven awards he was up for makes that last statement a technicality. But that doesn't mean it's any less true.

Of that handful, though, the Denton-born jazz outfit Snarky Puppy is the only one that can also add topping our local music Buzz Rankings to their list of the week's accomplishments.

While the band is already something of an international success — they performed in 18 different countries last year alone — there's no question that snagging a Grammy tremendously raises one's profile both nationally and abroad.

Other local artists taking home trophies at that ceremony included Edie Brickell, whose “Love Has Come For You” duet with Steve Martin earned the pair the “Best Americana/Roots Song” award, and, of course, Jordan “Son of Stan” Richardson, who earned a share of the “Best Blues Album” award for his part drumming and helping produce Ben Harper and Charlie Musselwhite's Get Up! LP.

But perhaps the biggest Grammy beneficiary — at least according to this article in Pitchfork — is Mineola native Kacey Musgrave, whose pair of awards and performance at the ceremony is estimated to have given her Same Trailer, Different Park LP at 147 percent rise in sales this week, with the album landing at the No. 28 spot on Billboard 200. Better yet, Billboard expects Musgraves to have an even greater sales week next week. Crazy.

Award ceremonies aside, the other biggest sources of buzz last week centered around reunion shows. To that end, The Party's reunion at the It'll Do, and Pleasant Grove and Ten Hands' Kessler gigs were all extremely well-attended affairs.

Speaking of well-attended showings, does the fact that Sarah Jaffe sold out the Granada this past weekend make her the biggest thing going, locally-speaking, at the moment? We tend to think so.