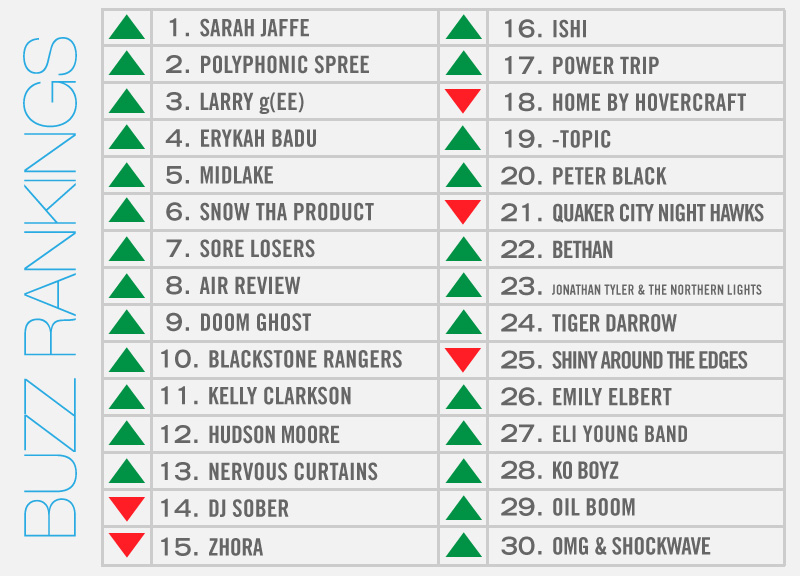 Sarah Jaffe And The Body Dominates The Rankings.

Just like this week's edition of White Noise, our Buzz Rankings column is dominated by acts appearing on television this week.

To be fair, though, North Texas bands have been racking up a crazy amount of appearances on the late night talk show circuit as of late.

Last Monday, as you might recall, The Polyphonic Spree performed a rather stirring rendition of “Happy Xmas (War is Over)” for Jay Leno. That performance came just a day before the group debuted an official video for the track via NPR's All Songs Considered blog.

Joining the Spree on the boob tube next week are fellow North Texans Larry g(EE) and Sarah Jaffe who will perform on Jimmy Kimmel Live! next Monday and Tuesday respectively.

Though Sundown at Granada will be closed for a Christmas party on Monday night, they do plan to host a watching party for Jaffe's appearance on Tuesday. In a somewhat related note, one-time Spree member Toby Halbrooks, who also directed Jaffe's “Glorified High” music video told Variety this week that his latest full-length feature film Ain't Them Bodies Saints was on its way to the Sundance Film Festival.

But television appearances weren't the only way to get noticed around town this week. Take last night, for instance, when an Erykah Badu DJ set prompted the Prophet Bar to move their weekly Wednesday night jam into the big room to accommodate the hundreds of folks who showed up to dance. Across town, Ishi were helping indie darlings of Montreal to stir up an enthralled crowd of dancers of their own. Meanwhile, DJ Sober (who spun at a private event this week with Surfer Blood), Zhora, and -topic have been hyping up our big Hometown Glory event at Dada this Saturday. We're pretty excited about that.

In other live performance announcements, Midlake, Sore Losers, Snow tha Product, Hudson Moore and others were announced as official performers in next year's SXSW festival this week. They'll join acts like Blackstone Rangers, Jaffe and Somebody's Darling in that regard. And, speaking of Blackstone Rangers, their show tomorrow night at Double Wide with Skeleton Coast and Nervous Curtains should prove to be one of the most heavily stacked all local lineups of the year.