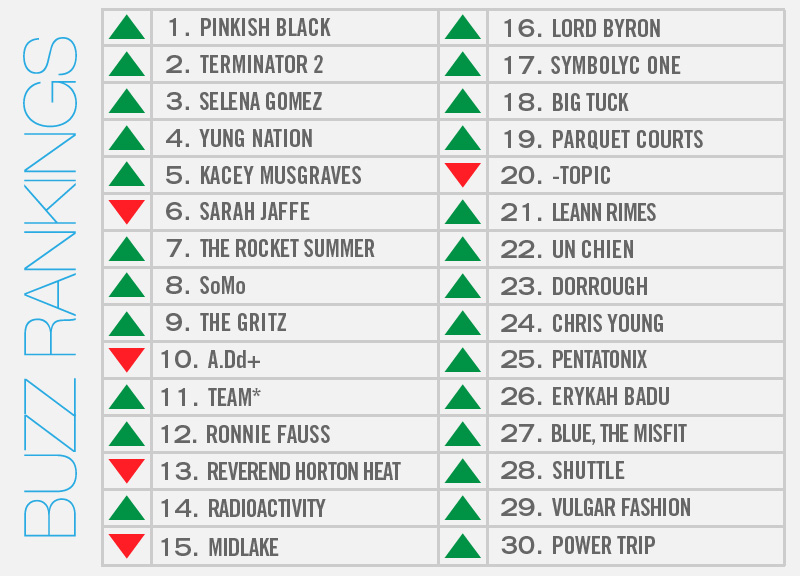 Pinkish Black Drowned Everyone Else Out This Week.

This week, the covers of the Fort Worth Weekly and the Dallas Observer were each not only dedicated to local bands, but they both went with guitar-free metal acts. Denton trio Terminator 2 found itself on the front of this week's Observer as Pinkish Black, which will headline a Friday night gig at Lola's Saloon and perform as part of Parade of Flesh's Holiday benefit show for the North Texas Food Bank on Saturday, graced the cover of the Weekly.

Only time will tell if this is actually the beginning stages of a larger, guitar-eschewing trend in town. All we know for sure is that this week's win marks the third time that Pinkiish Black has topped our local music Buzz Rankings.

In keeping with that spirit, The Rocket Summer, Ronnie Fauss and Pentatonix all released Christmas-themed music of their own this week, the last of which has already racked up 12 million plays on YouTube for their effort this week alone.

Elsewhere: Symbolyc One, Parquet Courts and Kacey Musgraves all received their share of shine from some of the national “best albums of the year” lists that have been released thus far; TEAM* released its debut EP during a sold-out show with Third Eye Blind; Radioactivity released a music video; and Dorrough released a new single that features Wiz Khalifa.