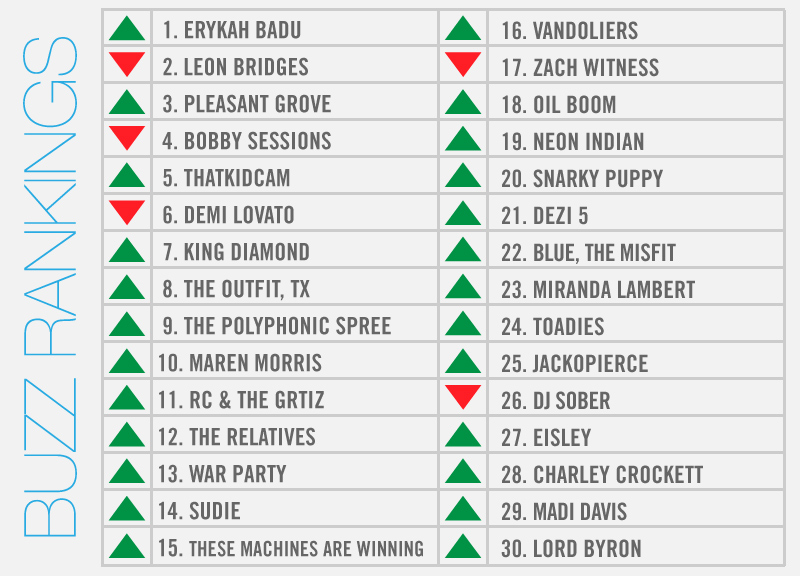 This Week, Erykah Badu Dialed It In.

Is it just us, or is Erykah Badu bigger now than she's ever been? While that assertion might be one that's up for debate, nobody's arguing against her claim as one of the hottest artists in the country at the moment. After hosting last weekend's Soul Train Awards and dropping one hell of a hotly anticipated mixtape, there's absolutely no question who should take home the top spot in our weekly, local music power rankings.

After three consecutive weeks in the No. 2 hole, the Queen once again reigns this week. The reason, of course, for that threepeat of futility was Leon Bridges' own domination of the pop music world. He'll be the musical guest on this weekend's episode of Saturday Night Live, in case you've forgotten.

Also in the national spotlight this week was Demi Lovato, thanks to her current run on KISS-FM's Jingle Ball tour. Locally, the return of Pleasant Grove was big news all across the state of Texas.

Then there was Bobby Sessions, whose Trees show last weekend was more than just an album release, but a showcase for his labels wide range of talent. Similarly, These Machines Are Winning's album release saw the multi-sensory project headlining the Granada over the weekend.

Other big shows of note affecting these rankings include last weekend's anniversary edition of the Prophet Bar Jam Session with RC & the Gritz and Snarky Puppy, Eisley's swing through Trees, King Diamond's potential headlining spot at House of Blues and the DOMA showcases, which will feature a whole slew of buzzing acts.