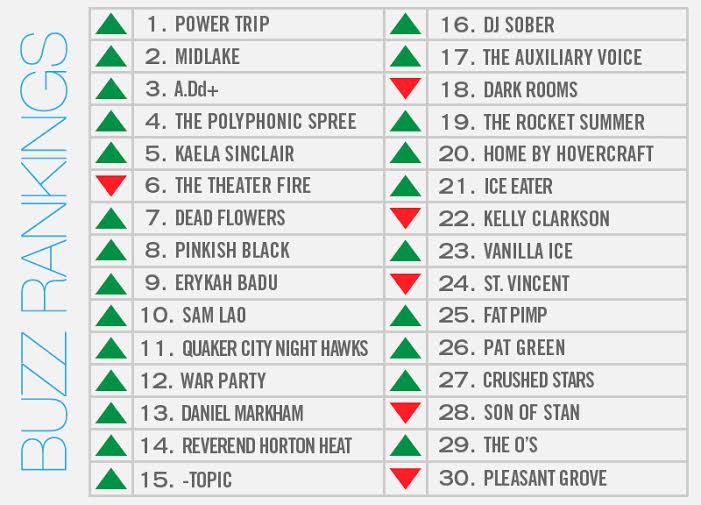 Blame it on the slow news cycle or the way that folks like to get all sentimental about the year that was, but nostalgia is a big player this time of year, both in the media and beyond.

The local music scene isn't immune to this trend, either.

With a band like Power Trip, though, it's hard to blame anyone for wanting to take a look back at the year that was.. It has indeed been quite a year for the local hardcore outfit: Between signing to a national label (for which they released a rather well-received full-length), embarking on copious tours (including the band's first ever European excursion) and introducing the world to crowdsurfing cat, this year is looking like it's going to be hard to top for the band.

And that's before we even get into this week's year-end thrashing that the band gave Dada this past Monday night, which gave the band just enough of a push to come out on top of this week's rankings.

Wistfulness, of course, was a big player in determining the rest of this week's rankings, too. The Observer and Star-Telegram each released their lists of the best local albums of 2013. It goes without saying that the majority of acts who made this week's rankings placed on at least one of those lists. Another handful of acts — Quaker City Night Hawks, for example — placed prominently on both year-end compilations. It's no wonder, then, that the Night Hawks were also the lone local band listed among this week's initial announcement of performers for 2014's Untapped: Fort Worth festival.

The other big common denominator in determining this week's most buzzing acts was the slew of big holiday shows going down this weekend. The biggest of those, perhaps, is The Polyphonic Spree's 11th annual Holiday Extravaganza at Lakewood Theater, which will feature two sets from the band, another courtesy of The O's, and, just for kicks, an appearance from live reindeer because, well, because.

Other than that? Midlake will headline Spune's 10th annual Christmas show; The Rocket Summer will perform a special solo acoustic Christmas set Friday night in small room of The Prophet Bar; and Dead Flowers, The Birds of Night, Daniel Markham and PVC Street Gang will perform at our Christmas party on that same night in the venue's big room.

Elsewhere, the “epic” Ninja Turtles and Vanilla Ice party received that funding it needed, A.Dd+ received some Pitchfork approval, and Auxiliary Voice, Arson States and Rivercrest Yacht Club will each celebrate the release of new albums with shows this weekend.