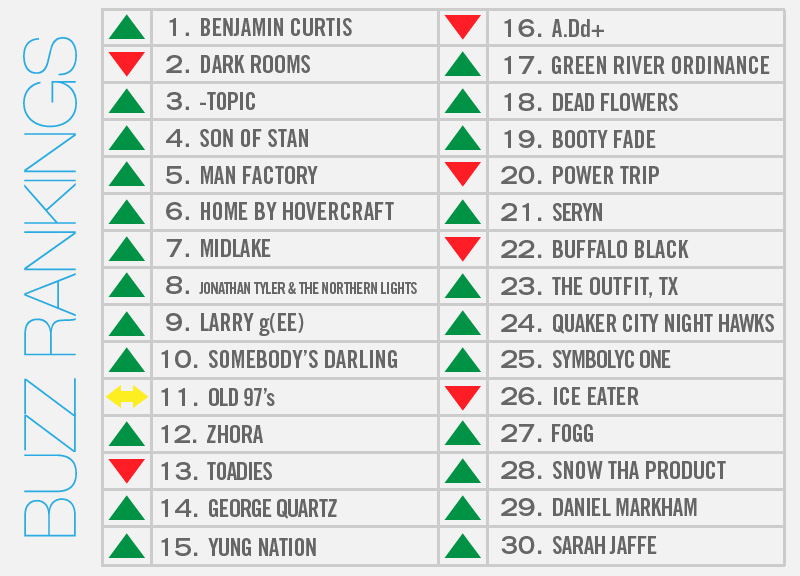 This Week, The Bells Tolled For Benjamin Curtis.

Even after a nearly year-long battle with cancer, the news of Benjamin Curtis' death this past Sunday at age 35 still felt like it came out of nowhere.

And, due in part to the overwhelming outpouring of tributes posted by, well, pretty much every music-related publication in the country in the days following his untimely passing, it's hard to downplay the legacy left behind by the former School of Seven Bells/Secret Machines/UFOFU/Tripping Daisy member. Sadly, as Stereogum pointed out this week, the biggest unifying themes from the mass of Curtis remembrance pieces penned this week was just how underrated Curtis truly was. To that end we feel like Zac Crain's heartfelt, personal tribute for Spin best sums up the breadth of Curtis' oft-overlooked talent.

On a more upbeat note, loads of musicians rang in the New Year with highly publicized NYE gigs this week. Among them were Green River Ordinance at Victory Plaza, Old 97's at House of Blues, Jonathan Tyler & The Northern Lights at Granada Theater, Larry g(EE) at South Side Music Hall, Somebody's Darling at Dada, Son of Stan at Lola's, Dark Rooms at The Where House, Zhora at Texas Theatre and Dead Flowers at Adair's.

Of course, those account for just one night of the week's biggest shows. Other performances of note this week include the handful of artists playing the trio of Dada's three-year anniversary shows (Dark Rooms, Sealion, Kaela Sinclair, Booty Fade, Son of Stan, War Party, Pageantry and The Outfit, TX), the Toadies' pre-New Year's gig at Billy Bob's, Seryn's sellout of The Kessler, those Parables and Big Iron reunion shows and next week's A.Dd+-led local hip-hop showcase at Granada Theater.

Not to be forgotten: -topic released his stream-of-conscious filled sophomore LP via Bandcamp this Tuesday, and Arlington power-pop outfit released the final installment of its six-years-in-the-making Street Fighter II rock opera.