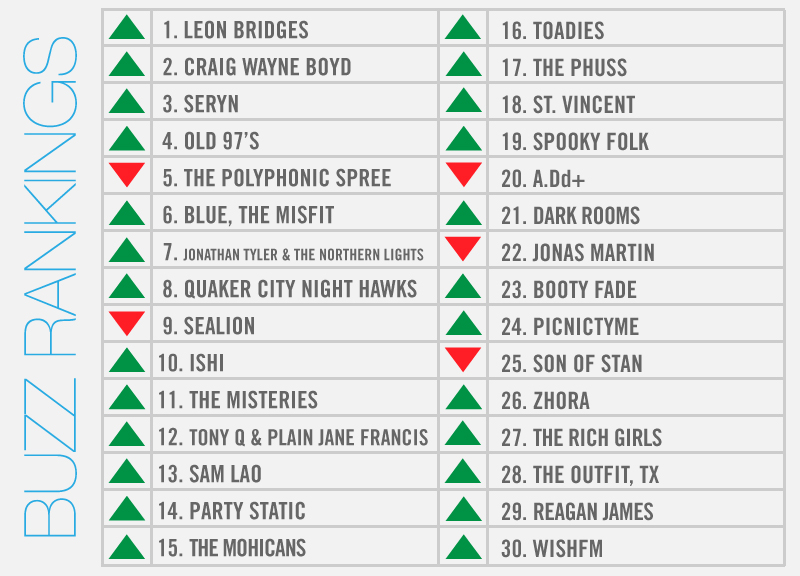 This Week, Leon Bridges Got Back To Your Heart.

It's been a relatively quiet week to close out the year — well, for pretty much everybody save for Leon Bridges. On Christmas morning, when most other musicians were at home, spending time with family, opening presents or hiding out in bars, Bridges came away with the biggest gift of all, a shiny new record deal from Columbia Records.

It's probably less surprising, then, that Bridges also landed the No. 2 spot in our list of the top 100 songs of 2014. Yeah, he's pretty much on fire of late. And when you throw in the fact that Bridges also appeared on a pretty stacked New Year's Eve bill at The Prophet Bar, it's really a no-brainer that he finds himself atop our weekly, local music power rankings for the second time.

Similarly, bands such as Ishi, Quaker City Night Hawks, The Phuss, Sam Lao, Zhora, The Rich Girls, Jonathan Tyler and The Polyphonic Spree were also helped out this week thanks to their own NYE shows. And bands like Old 97's, Spooky Folk, Blue, the Misfit, The Misteries and Sealion got a boost from our local albums of the year and songs of the year lists.

Then there's The Voice winner Craig Wayne Boyd, whose new single is only the second-ever song to debut at No. 1 on the Billboard country chart. Meanwhile, two of his fellow local competitors on that show — Reagan James and Luke Wade — will headline bills in town this week.