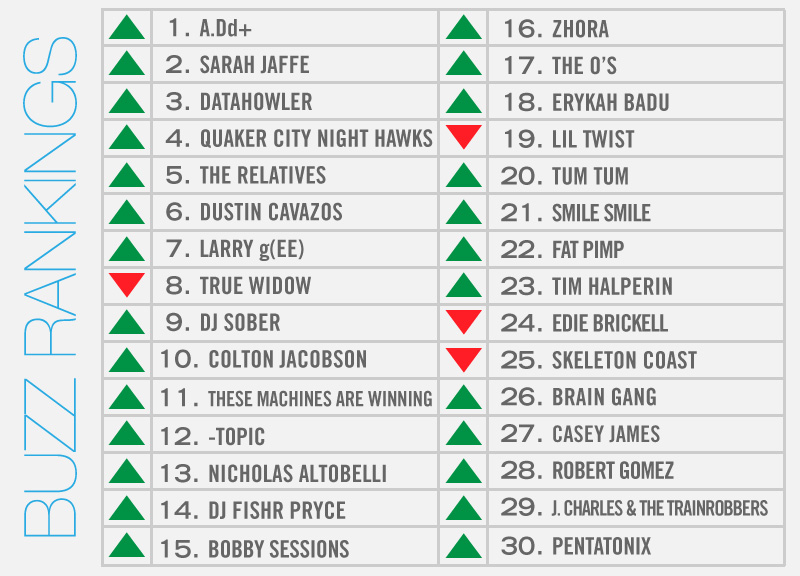 As they have a number of times before, Dallas hip-hop duo A.Dd+ tops the buzz rankings yet again this week. For those of you who've been keeping track, the win makes this No. 6 for the cerebral rappers who've simply dominated our weekly power ranking feature since we launched nearly a year ago.

But what is it all for? Like their previous wins throughout the past year, credit the duo's masterful teasing that keep fans artfully strung along, anxiously awaiting next latest release. That moment will come soon enough, of course; their DiveFlyHiLo mixtape is finally set to be released next Saturday night at a Granada Theater performance. And, for their parts, the recent addition of Tunk, Brain Gang, and -topic have added an extra degree of interest to that show (if that's even possible).

In the past week, teaser videos for A.Dd+'s Local Yokel Show appearance and their new music video directed by Austin-based photographer/director Luxury Mindz popped up online. The latter should be making its debut on January 22 via Red Bull USA's official website.

Before helping A.Dd+ hype up the crowd with his opening slot on that show, -topic is set to do the same for Stalley in the big room of The Prophet Bar this Saturday night.

Also providing opening support on that bill is Dustin Cavazos, who too has a new album of his own to hype. The bicycle-loving emcee is also acting as host to Thrwd Magazine's night of poetry next Wednesday night.

Also getting a bump this week thanks to the release of a new music video is Sarah Jaffe, whose clip for “Mannequin Woman” debuted on Entertainment Weekly's site last week and has since gone national.

Yet another video getting some love this week is one that's several decades in the making. Though their official debut effort The Electric Word won't be released until February 19, local gospel heroes The Relatives' Andrew Shapter-directed video for “We Need Love” gives fans a taste of what's in store from that outfit.

Elsewhere, Datahowler, Edie Brickell, These Machines Are Winning and Nicholas Altobelli all received some local media shine for recently released and/or upcoming albums. DJs A1, NVS, Sober, Fishr Pryce and Rev, meanwhile, will all be competing in this Friday's Red Bull Thre3style event at It'll Do, which aims to crown the city's best DJ. And Zhora announced that their upcoming appearance at Hailey's will be their “last one for a bit.”