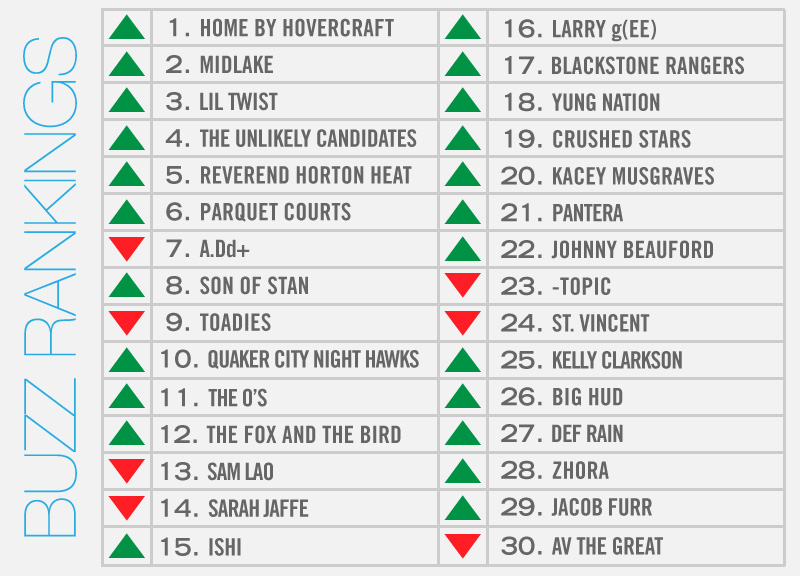 This Week, Home By Hovercraft Acted Up.

It may or may not come as a surprise to those who've been reading this site this week that raucous, chamber-leaning pop outfit Home by Hovercraft quite easily locked down the top spot in this week's Buzz Rankings.

What exactly does it take to be No. 1 in a week that sees multiple locals appear on national television, get added to the rosters of much-hyped festivals or debut music videos in national magazines?

Being a big, loud, ensemble with a tap-dancing percussionist certainly helps. So too does debuting your own musical. As does throwing all kinds of extra shine on the local scene by promising to play all kinds of local music before, during and after said musical.

For what it's worth, the band's whimsical On the Eve, which the local outfit managed to successfully stage as a workshop production last year, promises to be an even bigger and better deal this time around now that it's being presented as a professional production. It helps, too, that tiis year's run of the musical made its world premiere last night at Theatre Three, where it will run through February 9.

As for those other acts earning the national spotlight? Parquet Courts made its national television debut on Late Night With Jimmy Fallon this week, Kelly Clarkson made a guest appearance on last night's episode of Nashville and Midlake debuted its latest music video via Esquire's culture blog.

Speaking of videos: Several other locals — including The O's, Kaela Sinclair and The Rye Boys — each released new clips of their own this week.

Then there was Quaker City Night Hawks, Johnny Beauford and The Fox & The Bird, who each released new music this week.

Elsewhere: The Toadies are getting their own beer; Lil Twist was called the most important rapper in Dallas; and Midlake, Son of Stan, The Unlikely Candidates, SoMo, Ishi, A.Dd+, and Larry g(EE) were all added to the inaugural Suburbia Music Festival lineup.