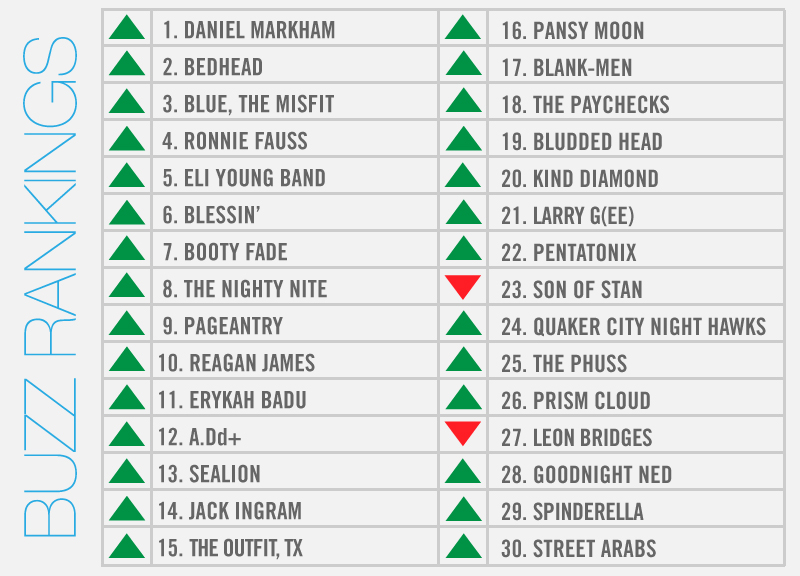 Over the weekend, Daniel Markham celebrated the release of his sophomore record, Pretty Bitchin' with a release show at Dan's Silverleaf up in Denton. And yet he barely cracked the Top 10 in our weekly local music power rankings last Thursday.

A week later, we have a different story, as Markham's managed to garner even more buzz for his newly-released disc over these past few days. To wit: The Dallas Observer's Kelly Dearmore wrote that “Markham's deft handling of such universally inspiring themes as heartache, anger and uncertainty make for a new album of infectiously relatable songs that beg to be played on repeat.”

Meanwhile, the Star-Telegram's Preston Jones had this to say: ” Coming off his nearly perfect 2013 LP, Ruined My Life, Markham serves up Pretty B—-in', another deceptively brilliant record.”

That kind of praise was enough to earn Markham his first-ever trip to the No. 1 spot in these Buzz Rankings this week. Perhaps worth noting; He'll perform a second, free-to-attend release show for the album this weekend at Deep Ellum's Twilite Lounge.

Other release shows of note this past weekend helped some of Markham's fellow Dentonites earn spots in the Rankings as well. We're talking, of course, of Bludded Head and Pansy Moon. And then there was Fort Worth honky tonk outfit The Paychecks, which released its debut LP on Halloween. Not to be discounted, meanwhile, is Ronnie Fauss, who also received favorable reviews for his new LP in the Star-Telegram and Observer, or Bedhead, which saw its upcoming five-disc reissue box set streaming in full over at NPR.

There were still other new releases this week that helped other artists crack into this week's Top 30. Son of Stan released a new video from his sophomore record via Pop Matters. Likewise, Blue, the Misfit releasedthis rather awesome video. Jack Ingram also debuted a new tune on Ray Benson's television show, and Booty Fade premiered this new Brandy remix on our own site.

Elsewhere: Erykah Badu announced a Thanksgiving eve show at The Prophet Bar; Eli Young and Pat Green announced that they'd be performing at Globe Life Park: Spinderella performed with Salt-N-Pepa at The Rustic over the weekend; King Diamond will perform a Fun Fun Fun Fest warm-up show tonight at House of Blues before serving as one of that fest's biggest headliners this coming weekend; Leon Bridges and Goodnight Ned performed at last weekend's Untapped Festival; and Reagan James continued her dominance on NBC's The Voice.