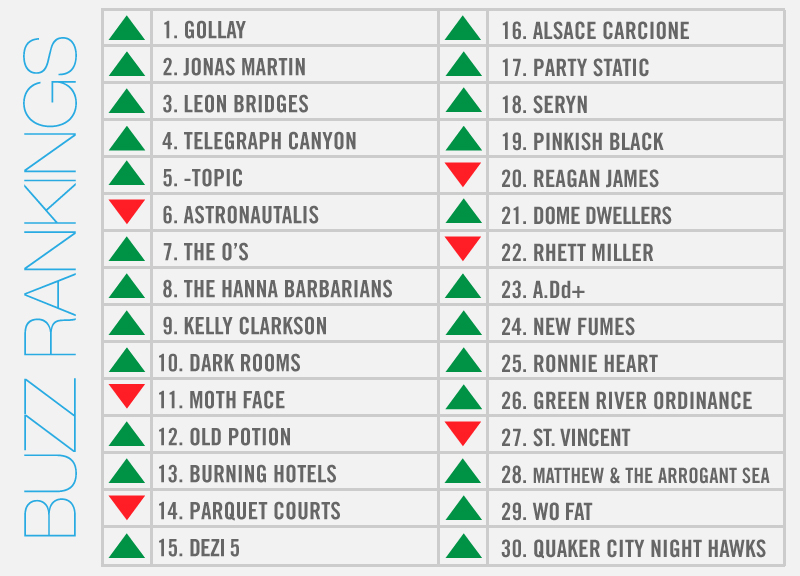 Gollay Really Built Herself Up This Week.

Fort Worth audiences have been hip to Gollay (read: the somewhat still pretty new-ish solo project from Un Chien's Rachel Gollay) for quite awhile now.

Star-Telegram music critic Preston Jones in particular was especially quick to give the indie pop guitarist love some time ago. Here in Dallas County, though, we've been a bit slower to catch on to what Jones has unabashedly called one of the finest local efforts of 2014. But that's slowly changing. And, this week, the Dallas Observer published a feature on the young act. (That piece, we should point out, was penned by Steve Watkins, who is a frequent contributor to the Star-Telegram's DFW.com blog.)

In any case, Gollay not only earned some cross-county love this week, but she also topped our weekly local music power rankings for the first time.

Not far behind Gollay were a couple of other 817-based acts. The No. 3 hole, for instance, finds recent SXSW anouncee Leon Bridges holding things down, while Telegraph Canyon finds itself in the No. 4 spot. Both of these acts will perform at this Saturday's Have a Heart show at Trees. Telegraph will also headline the last-ever show at Fort Worth venue The Where House along with Burning Hotels, Dark Rooms and Patriot.

And as it did with Bridges, inclusion on the most recent SXSW announce also helped acts like A.Dd+, Kirk Franklin, Gren River Ordinance, New Fumes and Ronnie Heart earn their spots on the list.

Then there's Jonas Martin, whose big album release shindig at The Prophet Bar last weekend helped vault him to the No. 2 spot. Like Martin, Old Potion and Alsace Carcione are releasing albums of their own this weekend. Also, like Martin, they fared quite well in this week's Rankings.

Elsewhere: Astronautalis played a sold-out homecoming gig at Three Links last weekend; Rhett Miller penned a piece about his grandfather for Sports Illustrated; and -topic landed a placement in a McDonald's commercial.