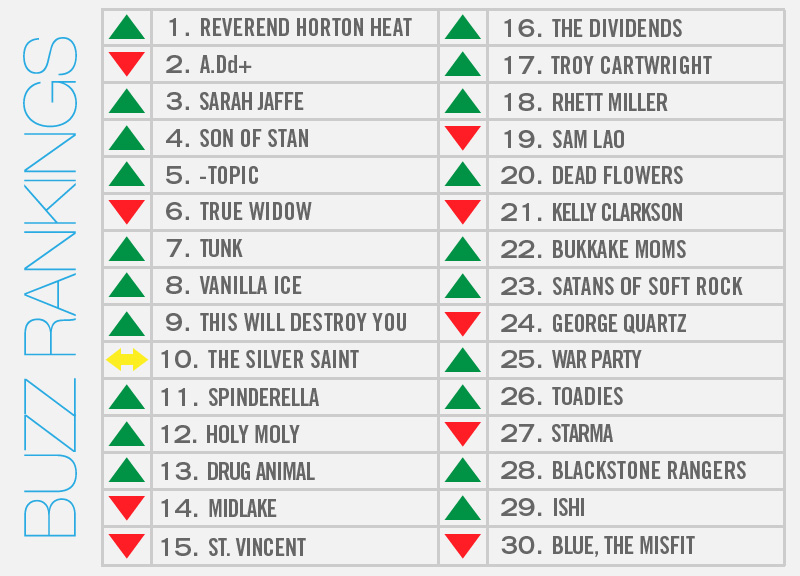 This Week, Reverend Horton Heat Gobbled Up The Competition.

When one thinks about all the big Dallas acts that are immediately recognizable to those living in the other 49 states, Reverend Horton Heat is certainly one of the first acts to come to mind.

One simply does not tour the country for going on 30 years — spreading the gospel via a rockabilly subgenre you're singlehandedly credited with pioneering — without earning a little cred along the way.

That being said, it is somewhat surprising that we've made it 90-plus weeks now without the Rev ever topping our local music Buzz Rankings. It's even more of a crime when one considers that, since we've been keeping track of these things, the band has co-hosted its own three-day music and tattoo festivalin Deep Ellum, recorded a new album, signed to Victory Records, performed at a number of local festivals, got called out by Spin magazine in a list of the worst moments of the '90s, and released its own brand of heat sauce .

That year-and-a-half sleight aside, we think it's far more perfect that The Rev's first Buzz Rankings victory comes on Thanksgiving of all days. Looking back through the band's catalog, we'd guess that 80 percent of their tunes are about the over-consumption of food, booze and/or drugs. We'd be remiss, too, if we didn't point out The Rev's Thanksgiving anthem “Turkey Gotta Gobble,” which chronicles the tale of a stuffed turkey and a honey glazed ham arguing about which is the more quintessential Thanksgiving dish. Though it's the ham in that tune that offers up the line, “Turkey, without your dressing, I'd be the man on holidays,” it'd be an equally apt declaration coming from the man himself. To that, his Thanksgiving supremacy aside, it is mostly thanks to the band's big annual “Thanks For Giving” fundraiser concert last night at Trees that the band finally landed its first ever No. 1 finish in these rankings.

And what a week it's been for several other of DFW's big national exports as well: Rhett Miller held his annual Cystic Fibrosis fundraiser concert last weekend; This Will Destroy You continued its ongoing legal battle with the I Am Second folks; Midlake acted as the guest editors of Magnet Magazine; Spinderella co-hosted an all-vinyl 45s night at Crown and Harp; The Dividends went platinum; St. Vincent earned the highly prestigious Smithsonian American Ingenuity Award; True Widow put on an intimate showing at Double Wide; and Kelly Clarkson released a Christmas album.

Speaking of Christmas: Dead Flowers released its new holiday tune this week, which can be streamed here.

Elsewhere: Sarah Jaffe, Zhora and Sam Lao announced an upcoming Granada Theater gig; Son of Stan released a new video; A.Dd+ will host a release show for its new album: and War Party is hosting a preview stream of its own new one.