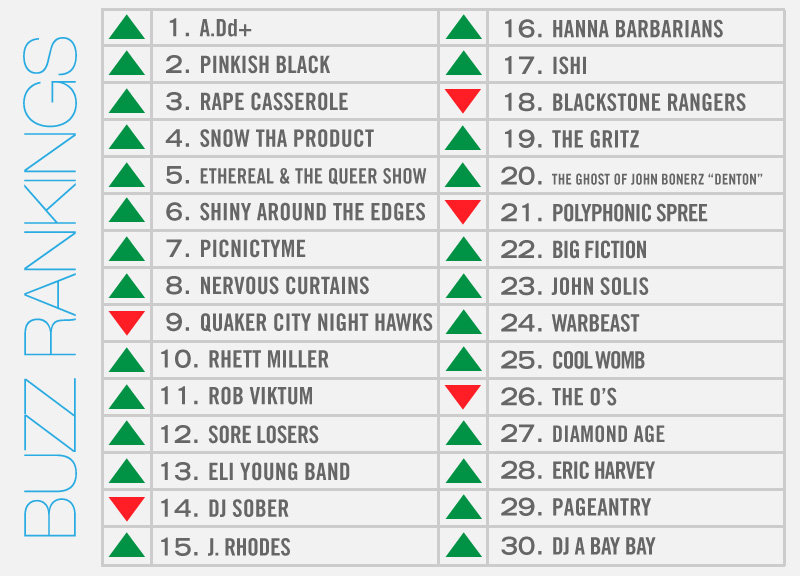 Once Again A.Dd+ Comes Out On Top.

Dallas hip-hop duo A.Dd+ have had no trouble maintaining a steady stream of buzz over the last nine months.

Trust us, we've been keeping track.

But, in a week in which they finally give Dallas its first taste of their long anticipated DiveHiFlyLo mixtape, they've really proved a point: There are few acts in town able to generate the kind of excitement that this group can. It's kind of ridiculous, actually. Even their frequent producer and collaborator Picnictyme is catching shine this week.

Fortunately, this is more than a one-act town.

Yesterday, Fort Worth's Snow Tha Product released a teaser cut of her own called “Cookie Cutter Bitches” from her upcoming December release, Good Nights & Bad Mornings. The fiery track goes a long way towards proving how she earned a spot on a recent Dallas Observer cover and a headlining slot in this year's DOMA showcase.

It was a strong week in other parts of the hip-hop landscape as well. Dallas producer J. Rhodes, it was announced this week, would have one of his tracks featured on the upcoming album from The Game. The song, called “Blood Diamond,” also features production efforts from Grammy-winning local Symbolyc One. And another local duo recently began working with a Grammy-winning producer of their own: Brown from Sore Losers told Pegasus News this week that, although his group couldn't yet reveal the name of the producer they've been working with as of late, that we'd all be impressed once he did.

Also worth mentioning: The once Grammy-nominated RC Williams and his Gritz backing band celebrated the sixth anniversary of their weekly Wednesday night jam session at the Prophet Bar last night.

And, really, it's just been a week filled with celebrations. Fort Worth's Pinkish Black, for instance, just signed a deal with California/Germany-based record label Century Media Records and has already begun work on a follow up to their award-winning debut release.

Lastly, two bands on this week's list made their live debuts this past weekend at Dan's Silverleaf. Sadly, although Rape Casserole and The Ghost of John Bonerz “Denton” managed to generate a hailstorm of buzz this week, they're likely to never perform publicly again.

In the end, though, that fact is just one of the magic things about an event such as the Rock Lottery.