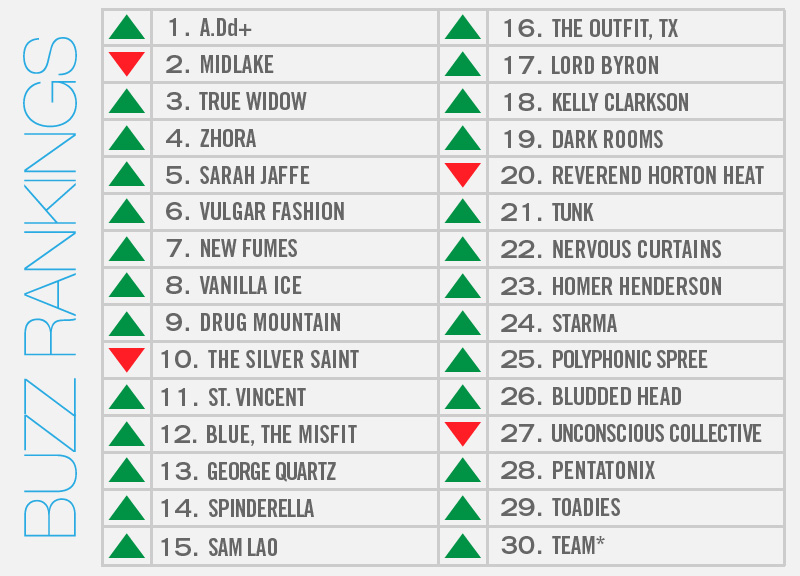 After a 10-month delay, perennial buzz magnets A.Dd+ finally released the national version of their long-awaited DiveHiFlyLo disc. For their part, the duo rewarded fans for their patience by adding five brand new tracks to the updated release that weren't featured on the local version of the mixtape that first surfaced back in January. They also made the whole thing available for free download right here.

Also, aside from their formal-attire-mandatory release show next week at West End Event Center, it was also announced this week that A.Dd+ would headline a massive all-local hip-hop bill at Granada Theater in January. Also on that bill, which is being presented by the Dallas Observer: Blue, The Misfit; Sam Lao; -topic: Lord Byron; Jaeson Green; and AV the Great.

Anyway, this win marks the eighth time that A.Dd+ has topped these rankings — a mark tied only by Sarah Jaffe (although, if you throw in the week Jaffe's other outfit, The Dividends, topped the rankings back in October, that'd make nine wins for the singer-songwriter).

Speaking of Jaffe: She's keeping busy this weekend, performing a pair of sure-to-be-sold-out shows at Dan's Silverleaf and participating in tomorrow evening's State of the Arts panel at Dallas Museum of Art. And that's before we even mention her ArtCon 9 DJ set last weekend, during which she shared a bill with New Fumes and Zhora. The latter of that pair also opened for Berlin last weekend at Trees.

Other big performances coming this week? The third and final Nevada Hill benefit show at Rubber Gloves, which will feature a reunited Drug Mountain; an intimate True Widow appearance at Double Wide; a Thanksgiving eve show with Reverend Horton Heat at Trees; and a JFK tribute show by Homer Henderson that'll start at Top Ten Records and move to Lee Harvey's

Another possible big show on the horizon? A Teenage Ninja Turtles and Vanilla Ice reunion/dance party at South Side Ballroom, crazily enough.