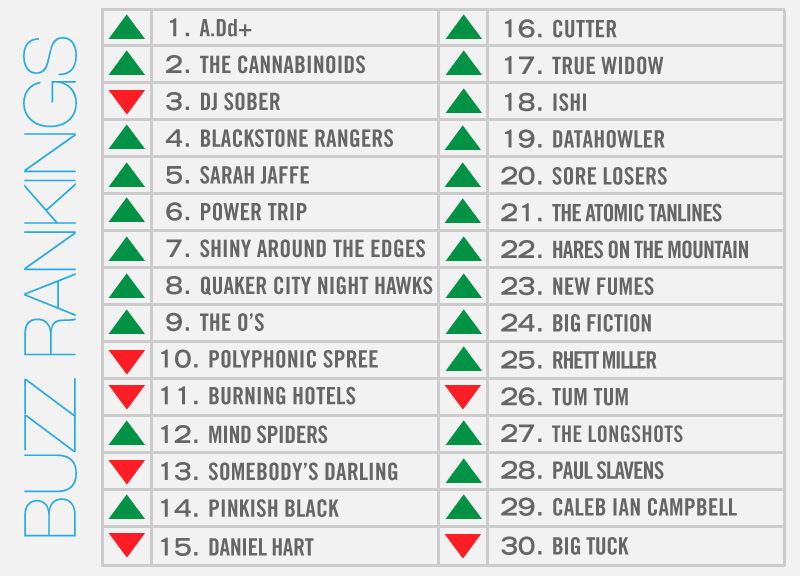 Thanks To The DOMAs, A.Dd+ Flies High Once Again.

For more than a week, the local music landscape has been dominated by the Dallas Observer's 24th annual music awards.

From the down-to-the-wire scrambling by bands to earn a few more last-minute votes and the anticipation of the now-annual showcases in Deep Ellum (which have become that neighborhood's most active night of the year) to the ceremony itself, DOMA-related conversations and updates have dominated Facebook, Twitter, Instagram and seemingly every other form of social media of late

When all was said and done, the consummately buzzing rap duo A.Dd+ were some of the Awards' biggest winners. Paris Pershun and Slim Gravy walked away with awards in the categories of Best Group Act and Best Rap/Hip-Hop Act, and arguably played a small role in DJ Sober's Best DJ win as well. As such, A.Dd+ found themselves on the cover of this week's print edition of the Observer, too. So it's no wonder then that this trio wound up with two of the top three spots in this week's rankings.

Meanwhile, the night's only other multiple-award winner, Sarah Jaffe, took home four awards of her own. Jaffe's wins came in the categories of Best Album, Best Solo Act, Best Female Vocalist and Best Video for her “Glorified High.” Meanwhile, the Cannabinoids, who released a remix of that track earlier this year and took home the Best Funk/R&B award, opened this year's awards ceremony at the House of Blues. The O's and Luna Matto also performed.

And yet despite the number of local music fans who showed up at the House of Blues to observe the awards ceremony spectacle in person, Best Hardcore Act winners Power Trip still managed to exceed capacity Tuesday night at Dada and incite copious amounts of crowd surfing during their performance with Title Fight. Earlier in the day, they caught some shine for their hand in Tapatio Studios, the DIY space they've helped open downtown that has already hosted the likes of Titus Andronicus.

Outside of their performances in the DOMA showcase, Quaker City Night Hawks and Ishi found themselves with plenty of other reasons to buzz this week, as well. For one thing, the two will be sharing a monster bill at the Double Wide as part of that venue's ninth anniversary celebrations. The two were also announced as taking part what promises to be two of the area's biggest New Year's Eve concerts: Quaker City will find themselves opening the Granada Theater's annual Jonathan Tyler and the Northern Lights gig and Ishi will be holding court over at Trees.