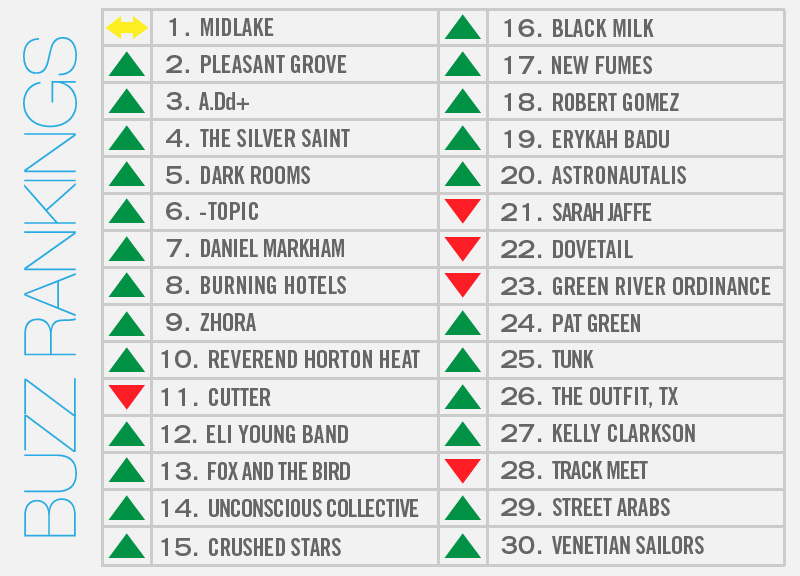 This Week, Midlake Is Kicking Out The Jams.

For the third time since September — and the sixth time since we started this — Denton's Midlake finds itself atop our local music Buzz Rankings this week.

Quite deservedly so, too: A week after releasing its latest full-length — to rave reviews, we might add — the band is currently gearing up to open for Pearl Jam at American Airlines Center on Friday night. And that's just the start, really. News came out this week too that some of Midlake's members are featured on the new album from Cocteau Twins' Simon Raymonde, which also includes cameos from members of Radiohead. Then there's the fact that the band is at the center of a new, 30-minute, Denton-centric documentary that made its debut this morning on Rolling Stone.

You might say that Midlake is on something of a roll at the moment. All signs would point that direction, anyway. But they were far from the only act in town that garnered national press this week.

Also? There was Fox & The Bird, which debuted a new single from its upcoming full-length via USA Today's Pop Candy blog. Reverend Horton Heat and his band, meanwhile, debuted a new single and music video from its first new record in four years via Vice's Noisey blog. And Kelly Clarkson appeared on The Tonight Show because that's just what she does these days.

Elsewhere: Wanz Dover got ready to unveil his massive 15 Guitar Army this Saturday at Double Wide; Pleasant Grove announced its reunification, along with plans for upcoming shows and a new album; New Fumes and Zhora will perform at Saturday's ninth annual Art Conspiracy event; and Astronautalis will co-headline this weekend's inaugural Oaktopia festival in Denton.