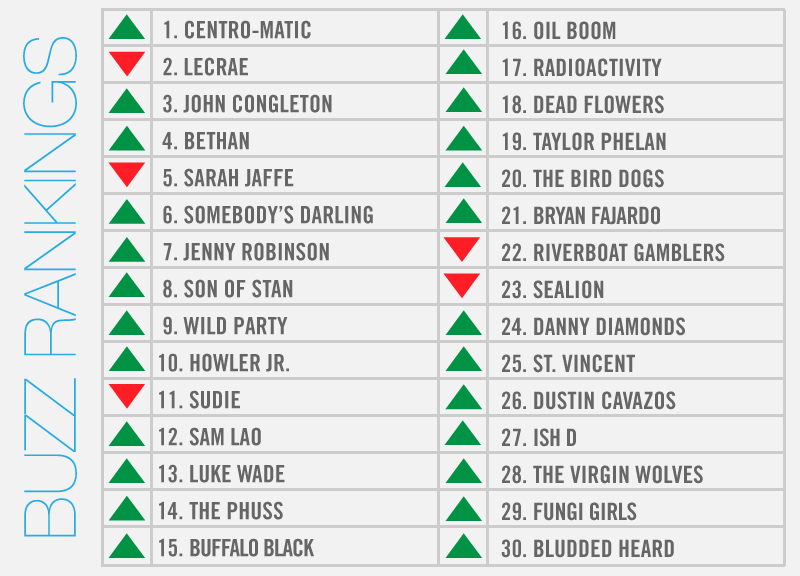 This Week, We All Loved Centro-matic Just The Same.

Back on September 21, Centro-matic frontman Will Johnson posted a message on the band's website indicating that, after a run of live dates this December, the band will call it quits. Then on September 22, tickets to both of the band's final two shows at Dan's Silverleaf sold out. Meanwhile, on September 25, that announcement helped Centro-matic earn its first-ever tip atop our weekly, local music power rankings.

Similarly, the band just added a Dallas date at The Kessler to that run of dates earlier today. While there still look to be tickets available to that one at the moment, the announce did help the band earn its second Buzz victory.

Last week's winner, Lecrae, held strong at No. 2 thanks to a live stop at Grand Prairie's Verizon Theatre and an in-depth interview feature in The Atlantic. And speaking of interview features, Dallas producer extraordinaire John Congleton dropped by NPR's All Songs Considered, where he shared some new solo (Nitey Nite?) tracks.

Other bands earning spots on the list this week thanks to newly released albums include Bethan, Son of Stan, Wild Party, Howler Jr., and Jenny Robinson.

Elsewhere, big shows helped earn spots on the list for several others. For instance, Sarah Jaffe, who appeared at the barbecue-tastic Smoked Festival; Riverboat Gamblers, which performed at Double Wide's 11th anniversary bashand The Phuss, which gave a middle finger to the city-wide power outages with its tour kickoff show. And just ahead, Sam Lao will appear alongside Chevy Woods, Fat Tony and Goldyard at the next Red Bull Sound Select show.

Finally, Luke Wade, Reagan James, Taylor Phelan, Kelli Douglas and Craig Wayne Boyd were all helped out this week thanks to NBC's The Voice; Somebody's Darling helped us kickoff our new Live at Malone Pictures video series and Oil Boom and Dustin Cavazos each released new music videos this week.