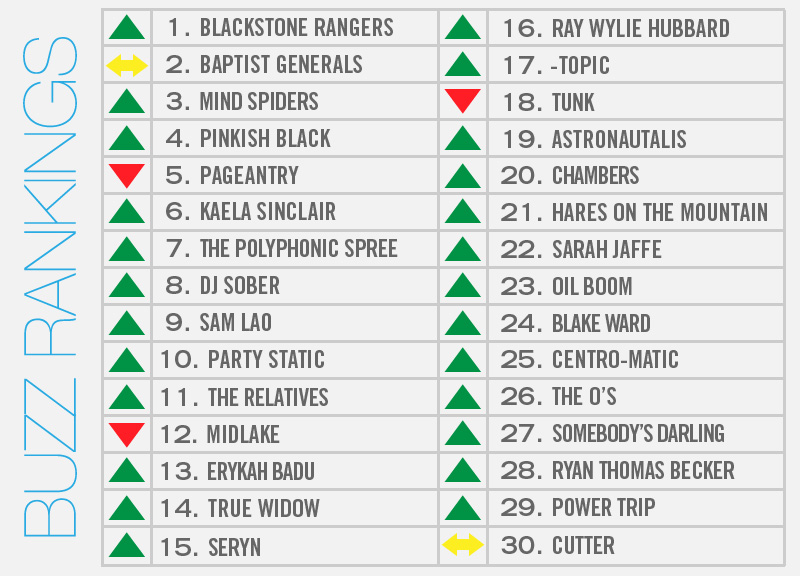 Pretty much the big local music story of the week was the Dallas Observer's announcement of this year's music awards nominees. And deservedly so: As it is every year among local musicians, venue staffs and other industry types, the announcement managed to cause its usual stir.

Also, just like every year prior, social media went wild this week with different contingents complaining that certain genres (blues, metal, reggae) were underrepresented on this year's ballot, while others (country, alt-country, Americana) were potentially over-represented. It's a fair argument, to be sure, and we definitely feel for the Observer's staff this time every year. All that bitching can take a toll.

That being said, no singular nomination managed to evoke the level of carping, confusion and controversy as Blackstone Rangers' nod in the Best Americana category. Minutes after the nominations came out Blackstone's Ruth Smith quickly took to Facebook to argue her band's position as starkly anti-Americana.

Soon after, members of bands like Zhora, Quaker City Night Hawks, Nervous Curtains and several others expressed a similar sense of bewilderment at the nomination. In turn, the Observer expressed via Twitter that Americana was “where [Blackstone Rangers] made sense to [its] panel” and that they, “reserve the right to apply multiple words to the sounds [Blackstone Rangers] make.”

In the end, though, Blackstone's repeated requests to be removed from the ballot entirely were eventually granted, and, as of this writing, the band's name is wholly absent from the ballot.

And, while it looks like Blackstone Rangers won't be winning any DOMAs this year, all the commotion did help the “distoro-pop” outfit land the No. 1 spot in our weekly Buzz Rankings.

To that end, a large contingent of this week's buzzing bands were also nominated for DOMAs this year.

Among the rest of the bands on the list are Baptist Generals, who not only served as the openers for this week's Daniel Johnston show at the Kessler, but as Johnston's backing band as well. Astronautalis, meanwhile, not only played main support at this week's Why? show along with fellow list-maker -topic, but was also announced as being added as one of the headliners for the upcoming inaugural Oaktopia Fest in Denton.

Meanwhile, Mind Spiders got some love from Spin, The Polyphonic Spree announced that it'll be throwing the first of what will be an annual Halloween party at Lakewood Theater in the coming weeks, Party Static opened for Peelander-Z at Three Links, and DJ Sober will be helping us throw the second edition of our monthly Pop That! party at It'll Do Clubtomorrow night.