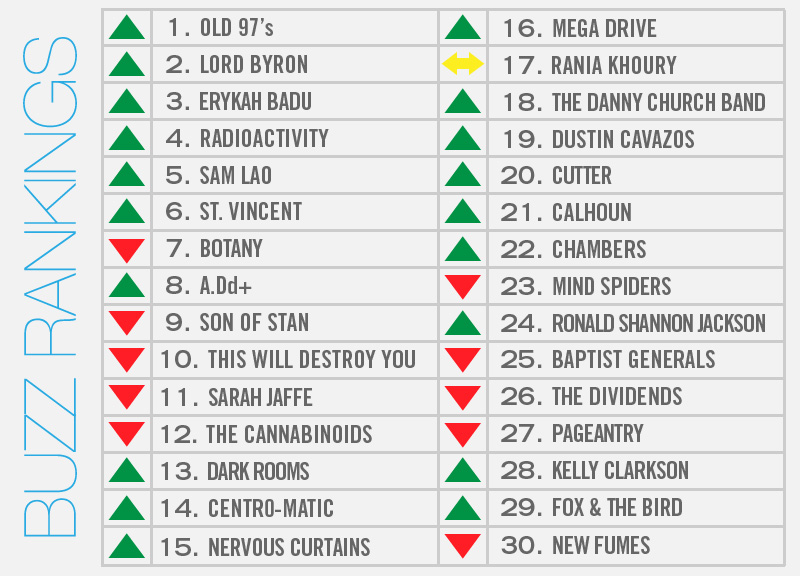 This Week, The Old 97's Caught A Nice Break.

In a week that saw no fewer than half-a-dozen music festivals going down in various corners of Metroplex, many of them prominently featuring local musicians, live performances were indeed a big source of buzz for dozens of artists this week.

That being said, the biggest — or, at the very least, the coolest — story in local music this week centered around a band's recorded material. And quite an old piece of recorded material it was.

We're speaking here, of course, about the Old 97's, whose cover version of Marty Robbins' “El Paso” was revealed to be the inspiration to Breaking Bad creator Vince Gilligan's vision for his show's series finale, according to an interview her gave The Hollywood Reporter this week.

Sure, that insanely rad honor was probably all the ego-boosting the local alt-country pioneers needed for one week, but they also earned themselves the top spot in this week's Rankings to boot.

An extremely close second this week, though, was Lord Byron, who made his live debut at last weekend's Index Fest. And what a debut that was, too. Even after hyping himself up via social media for the past few weeks — calling himself the best rapper in Dallas in the process and garnering loads of press in the meantime — Lord Byron managed to more than live up to all of his hype. It was enough not only to earn the approval of peers such as -topic, Blue the Misfit, and A.Dd+, but it earned his very first show an encore, too.

A little further down the list, we find fellow relative newcomer Sam Lao, who has performed so many times this week we've lost count. To wit: Lao opened for Jessie Ware at South Side Music Hall and Jean Grae at Elm St. Bar, performed at Blake Ward's Tuesday night Sundown residency, and made a guest appearance with The Cannabinoids at Index Fest over the past seven days. Needless to say, Lao's quickly becoming one of the most in-demand emcees in town.

Other notable live performances this week included St. Vincent's intimate solo gig at First Unitarian Church of Dallas; Erykah Badu's live set at the Lamar Street Festival and her DJ set at the North Texas Veggie Fair; and This Will Destroy You, New Fumes, and Botany's offerings at the most recent Red Bull Sound Select event.

Elsewhere: Radioactivity released a stream of their upcoming debut album via Noisey; Kelly Clarkson tied the knot; Mega Drive introduced himself to Dallas; and Botany released a collaboration with Father John Misty.