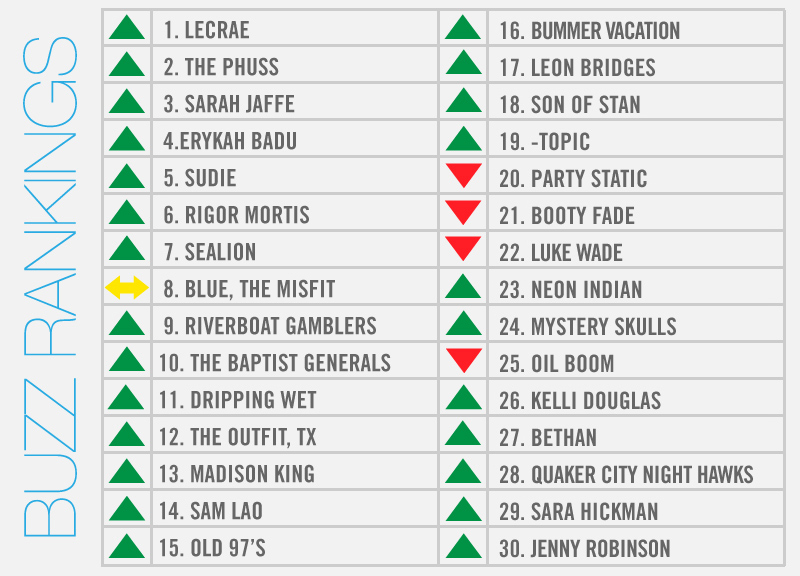 This Week, Lecrae Rose Up.

While there are plenty of folks out there still trying to figure out whether Lecrae is a quote-unquote Christian rapper or just a rapper that happens to be Christian, the one thing that is certain is that the locally-tied artist is hip-hop's undisputed king at the moment.

And, just after selling 1.4 million copies of his latest record in just a few weeks' time, Lecrae returns to town for a performance at Verizon Theatre this Saturday night as this week's reigning Buzz Rankings champ, too. It marks the first time he's landed in the top spot — and, more impressive, just the second time he's ever appeared anywhere in our rankings since we've been keeping track.

Just behind the rapper is local hard rock trio The Phuss, which will this week release its third full-length. Aside from a couple of favorable reviews for that album, the band played a couple Dallas shows this week, including Sunday's turn at Index Festival and tonight's tour kickoff show at Three Links.

Speaking of Index Festival, several acts earned their spots in this week's rankings after appearing at that one. Some of those include Sudie, Sam Lao, Bummer Vacation, Son of Stan, Bethan, Booty Fade and Oil Boom, just to name a few.

Elsewhere, The Outfit released a new video, Neon Indian turned in a TED Talk, Kelli Douglas became the fourth North Texan selected to compete on the current season of The Voice, Sara Hickman joined the North Oak Cliff Music Festival lineup and most everybody else was nominated in some form or fashion in this year's Dallas Observer Music Awards.